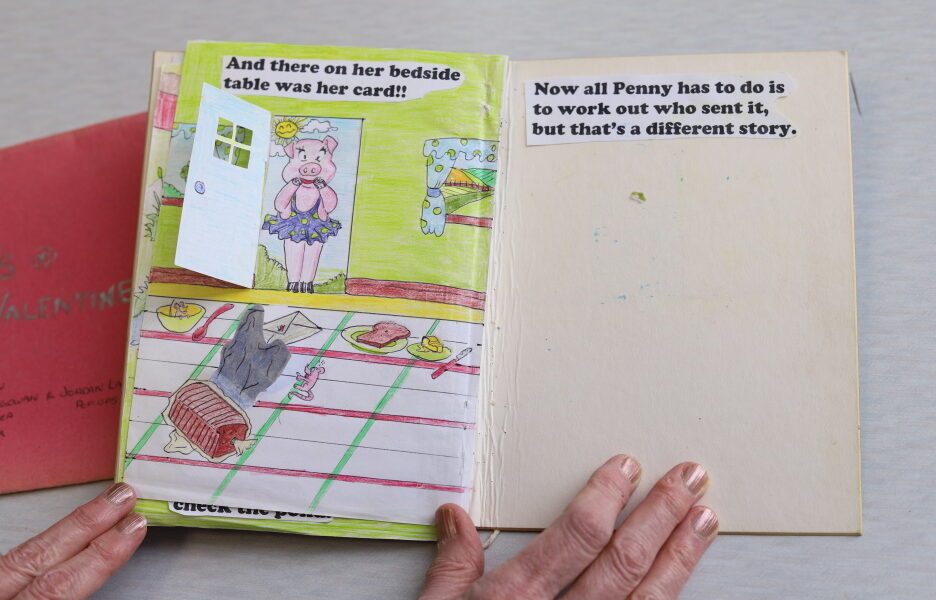 Jacob gives Mum Samantha a 5* review for her picture book

Ever wondered what it would be like to be confronted in adulthood with one of your school exam papers? For consultant geriatrician Samantha Holte (Leung) past met present in a much more creative fashion as her son Jacob, currently a pupil in Primary One, got the chance to view his mother’s Year 9 (second form!) picture book project.

Over two decades have passed since Samantha last saw what her English teacher Miss Gracey had described as “A gem of a book-far better than some professionally published picture books.” Penny’s Valentine was created by a small group of second formers (Samantha, Fiona Magowan, Jordan Landy and Adam Law) as part of a project which saw the class set create six picture books. Prior to composition the class studied successful picture books and post writing/illustrating read their stories to pupils in the Prep Department.

Penny’s Valentine has been in Miss Gracey’s proud possession ever since and the clearance of classrooms prior to refurbishment prompted Head of Department, Mrs Gillian Weir, to send a photograph via social media to Samantha. Three days later saw a happy reunion between the former pupil and her teachers slightly to the bemusement of Jacob who seemed amazed at the idea Mummy had once been a pupil.

Samantha was able to update the staff about the other members of the creative quartet and the teachers were delighted to hear that Adam Law, the illustrator of Penny’s Valentine, now works professionally as an animator. Adam’s brother, James, has also forged a very successful careerin this field. Penny’s Valentine features many of the most popular inter-active elements of picture books such as lift the flaps and textured surfaces. Watching Jacob reading the book with obvious interest and enthusiasm Samantha expressed amazement at her own youthful creativity and quickly recalled some of the finer details of its construction such as the doubled lift the flap on one page! Jacob’s reading  gathered something of an audience in the Primary One classroom and the youthful critics were quick to assure Samantha it was “a very good story” she had written all those years ago.

“It was such a pleasure to see Samantha, to meet Jacob and to witness again the pleasure the story of Penny’s Valentine can bring to our youngest pupils. It’s always a great joy to hear of the successful careers former pupils have built and it’s especially exciting when early ambitions and potential evolve into tangible outcomes. It’s inspiring that Adam is working as a creative and I’m hoping that this visit might tempt Samantha into writing some new stories for Jacob and his little sister.”