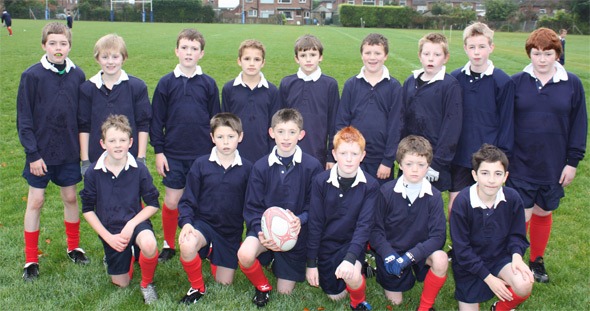 The Wallace High School enjoyed a good set of results against BRA last Saturday morning. The senior results along with the U13 and U12 matches revealed the best performances in a busy twelve match Saturday morning.

The 1stXV fought hard for a 16-15 victory against a physically larger and stronger pack of BRA forwards. BRA had produced some noteworthy results already this season and Wallace produced their best performance of the season to secure victory.

Wallace welcomed back Ulster Schools’ players Rory Stewart and Chris Spence who gave the side an obvious lift. Andrew Gilmore kicked two early penalties in his first outing of the season following injury. However, his return was short lived as he went off injured with a twisted ankle just before half time.

The strong running BRA forwards were able to make considerable inroads into Wallace territory and it took some brave and committed defending to keep the score at 8-6 to BRA at half time. The back row trio of Jamie Clements, Rory Stewart and Daniel Henry worked tremendously hard at the breakdown and were central in preventing further BRA scores.

Wallace enjoyed good territory and possession in the second half and following pressure from the backs Matthew Godfrey capitalised on a BRA mistake to go under the posts for a try which David Scott converted. The Wallace half backs of Nathan Reid and Alastair McCollum began to exert their authority on the game as the forwards produced quality phase possession. The urgency and commitment of the front five was excellent with Colin Munn, Chris Spence, Daniel Henry, Stewart Evans and James Thompson very much to the fore.

David Scott added another penalty to put Wallace 16-8 ahead. BRA drove over for a converted try on the last play of the game to leave Wallace as 16-15 winners.

This was a much improved performance for Wallace and one in which they will have to improve upon again next week as they travel to Regent House.

All the players and coaching staff were delighted with the inclusion of Kyle McCall in the Irish Schools training panel in Dublin last weekend following his excellent performances for Ulster Schools. The selection of new cap Chris Spence along with Rory Stewart and Kyle McCall for the Ulster Schools game against Connaught was due reward for his hard work in returning from injury. Ulster Schools won both games.

The Wallace High School U12’s began their competitive rugby fixtures last Saturday morning against BRA with three victories. In the first match Wallace won by 45-10. The scoreline flattered Wallace as the half time scoreline was 10-10 with some good rugby played by both sides.

However, the introduction of Ikenna Nzewi totally transformed the game as he scored two breathtaking tries from his first two touches of the ball. He added a third later in the game as Wallace dominated the second half. The energetic Tom Baird also scored three tries while there was a try apiece for Zach Scott, skipper Jonny Stewart, Ben Finlay and Ryan Garnham.

In the second match, Ikenna Nzewi scored three tries while the strong running of Andrew Morrow also heralded three tries. Toby Kerr’s footwork allowed him to dance through the defence for two tries while Joshua Magill got in on the act with a score. Wallace won 45-10.

Ross Portis was man of the match in the third game scoring a remarkable four tries while there were also tries for Josh Victor, Connor Sinclair and Curtis Connery. Wallace won 35-0.