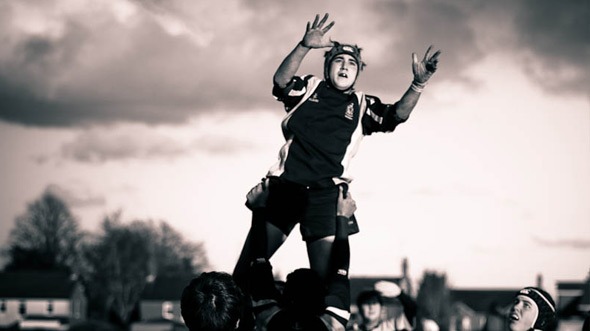 The Wallace High School Medallion XV defeated Rainey Endowed, Magherafelt 20-3 in the quarter final of the Medallion Shield recently and will now face up to RBAI in the semi finals on Saturday.

The match was played in cold and dry conditions on a heavy pitch but despite this the Lisburn lads started positively. Rainey were combative up front but the Wallace 8 matched their opponents gaining first parity and then the upper hand in the opening tight forward exchanges.

A strong runs of set pieces from Number 8 and Captain Zack McCall supported in the loose by the dynamic openside Cal McIlwaine and powerful lock Andrew Coffey allowed the team to develop good field position. This resulted in the first try from a lineout in the Rainey 22 where a well practiced lineout catch and driving maul led to the first score by Coffey. One for the forwards and despite a missed conversion 5-0 to Wallace!

Rainey responded well and when Wallace strayed offside at a ruck, they were punished with a penalty. The Rainey 10 successfully kicked his goal to make the score 5-3. Throughout the remainder of the first half the pack continued to win the collisions and secure good possession. The ruck was producing quick ball which released the backline attack enabling Jordan Grattan to go over in the corner for a fine try. Another missed conversion but still the half ended 10 – 3 to Wallace.

The second half followed the same pattern as the first with Wallace attacking and meeting stubborn defence. Rainey were unbeaten this season and were well organised. They were very committed in the tackle and proved difficult to break down, forcing a number of errors from Wallace early in the half. The Rainey fullback was a threat throughout.

Wallace continued to show good composure though and played their patterns with great pace. A good box kick from Mark Hylands created the opening and gave Wallace good field position in the Rainey 22 from which Rhys Lynch(6)stole the opposition lineout ball. A series of strong drives from Chris Knowles (2), Ralph Lavery (4) as well as the back row led to another try for the forwards, this time scored by captain Zack McCall. This left Rainey with a mountain to climb at 15 – 3 down and the Lisburn team continued to make their life difficult in all areas of the pitch.

The final Wallace try was their best, a real team score. Forwards and backs combined to orchestrate a passage of play from deep in their own 22 to score. Peter Weir (9) box kicked beautifully and the pack secured and stole possession in a series of lineouts as the team advanced into the oppositions half. When the ball was released wide the backs executed a prerehearsed move perfectly for Gratten to score again in the corner. A brace of tries for Jordan and 2-2 in the bragging rights battle between forwards and backs! Another missed conversion was irrelevant as the boys enjoyed their success.

Wallace now play RBAI in the semi final to be played at Campbell College’s Foxes Field on Saturday 13th March, 10.30am start. All support is welcome, so come and give the boys a roar!