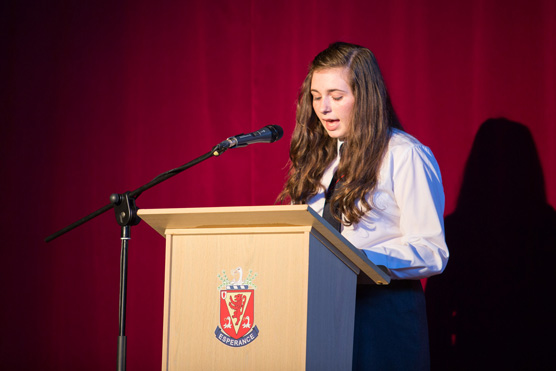 The final event in the Wallace High School Music Department calendar for 2014 took place on a balmy summer evening which was complemented by a wide range of excellent performances. The Junior Concert, Music Awards and BBQ is the traditional end of season event for pupils in Years 8 to 11 and showcases the work of the String Orchestra, the Junior Band and Cantabile, the junior choir.

The concert began with accomplished performances from Year 8 students as Laura McCullough played the comically entitled “Ne tirez pas sur le pianist!” or “Don’t shoot the pianist!” This was followed by a family affair as cousins Sarah Cherry and Oliver Patterson played a duet of “The Lonely Goatherd”, a prelude to Wallace’s performance of “The Sound of Music” in the Autumn term. The accomplished comperes for the evening were two Year 11 Music students Anna Farrelly and Connor Richardson who delighted the audience with vocal contributions of their own. 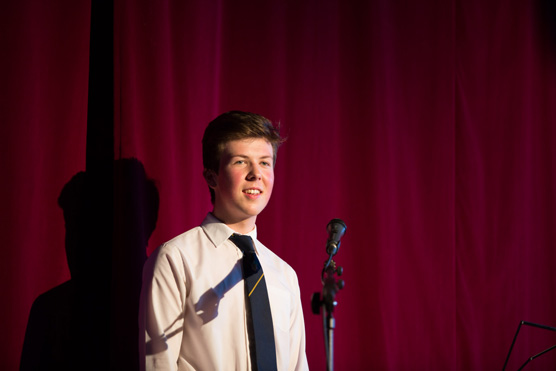 Wallace is very proud of Dominic Yu who is a veritable concert pianist in waiting. From the first dramatic notes of “Prelude in C# minor” by Rachmaninoff the audience knew they were listening to a performer whose musicianship far exceeds his tender years. The evening was varied in mood as Amy Warke played a sultry “Smoke gets in your eyes” on the flute which was followed by Wallace’s own Blues Boys featuring Amy’s brother Jonathan on guitar. The band is made of Year 10 boys who have already performed to high acclaim at a wide range of events. Strings featured strongly in the programme; soloist Katie Windrum played the evocative “Hungarian Dance” and the String Orchestra played three pieces concluding with the delightful “Aurora borealis”. 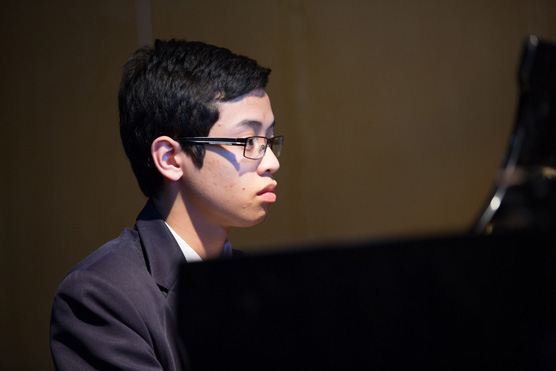 The final phase of the concert was especially energetic as the Junior band delighted with two “standards” namely “The Muppet Show Theme” and “What a wonderful world”. This was followed by a charismatic “Let it Go” by Huff sung by the Year 11 girls who will be leaving Cantabile to join the Chamber Choir, Capella. Earlier three girls ( Hannah Cairns, Eilidh McKnight and Anna Farrelly) who attend the song writing classes had impressed with their own composition entitled “Life”.
The climax to the evening came with Cantabile who sang the familiar “Lean on Me” and the vocally challenging Latin American vocalise “Libertango” which brought prolonged applause.

Head of Music Mr David Falconer paid tribute to his colleagues Miss Chelsea Pascoe, Mr Steven Alexander and Mrs Wendy Davison for their contributions to the life of the Music Department. Wendy returned from maternity leave the week of the concert and masterminded all the practicalities of the awards and the BBQ. He also thanked the tutors who visit each week and member of the Board of Governors, Mrs Celia Gourley for her generous funding of the Hadden bursaries.
Happy audience members then enjoyed their burgers and hot dogs expertly cooked by Heads of Year Mrs Gillian Carson, Dr Liam Halferty and Mr Matthew Glenn. Principal Deborah O’Hare commented “Tonight has been a wonderful celebration of the talent of our young people and we are eagerly awaiting our school show “The Sound of Music” which we anticipate will be a sell-out event.”