The Wallace High School main hall was filled with school governors, staff, parents and pupils from the Preparatory Department for the annual Spring Production. This year the musical of choice was “Annie”. The children from the Department were exceptional and provided the audience with a wonderful evening of theatre.

Lily Scott blew us all away with her magical singing voice as the main character “Annie”. Her fellow orphans did not put a foot wrong during “It’s a hard knock life” and “Easy Street”.

“Lily” played by Megan Field and “Rooster” played by Christopher Dumigan made us laugh with their clever disguises. These characters were firm favourites with the younger members of the audience. 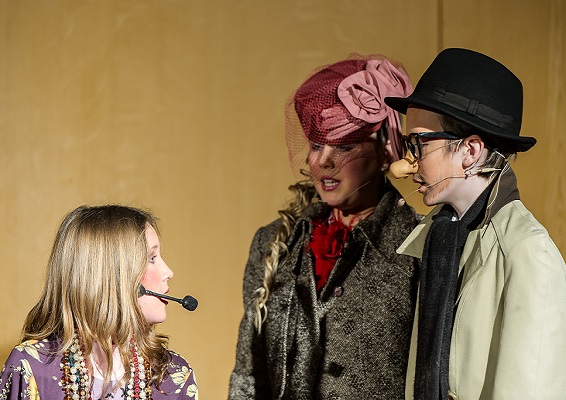 Rooster and Lily in disguise

The maids, waiters, radio team, policemen, judges, apple sellers and not forgetting “Sandy”, the dog made the nights of the show a tremendous success.

Many thanks to Mrs Wilson, musical director for her dedication and hard work in preparing the children for the show. The night was special as Mrs Wilson celebrated directing her 35th musical at The Wallace High School. Mr Hall, former Head of Department and Mr C Scott, a former Preparatory pupil added to the evening by their superb musical accompaniment.

Mrs Latham, Head of Department thanked pupils, parents and staff for assistance with choreography sound, costumes and make-up for the show.