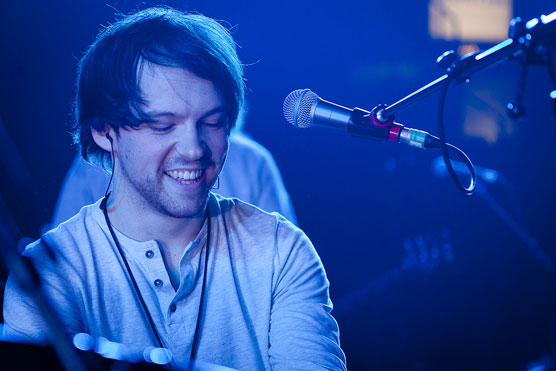 Former Wallace pupil Peter McCauley made thousands of new fans this week, supporting Snow Patrol at their sold out Odyssey arena tour. Peter is a lead singer /drummer/pianist who performs under the name “Rams’ Pocket Radio”.

Peter, an Architecture graduate from Queen’s, has fond memories of his time at the Lisburn school. “Particular highlights of my time at Wallace were my A Level Art classes. I also played rugby for the school, with my squad winning the Third XV Schools’ Cup.

I thoroughly enjoyed being a member of Capella, the chamber choir. My time at Wallace opened doors to many opportunities and the school really nurtured my creative talents. All my teachers were incredibly supportive of creativity and it’s great to hear of so many of my peers excelling in their chosen careers.”

BBC Radio Ulster’s Stuart Baillie has been very impressed by the “emotionally focused” Ram’s Pocket Radio, commenting on the intensity of “Pete bashing out the sweet piano chords and the songs steering into some twisted destinations.”

Principal of Wallace, Deborah O’Hare added, “There’s been a real buzz in school this week as so many of our staff and senior pupils have attended the Snow Patrol concerts at the Odyssey and thoroughly enjoyed the performances of Rams’ Pocket Radio.

Peter is an inspiration to us all – an exceptional young man who excelled in so many areas of school life. We are looking forward to him retuning to Wallace to lead workshops with our GCSE and A Level students. I am thrilled to say that the creative talents of Wallace students are continuing to flourish with many of our Key Stage Three students using their iPads to record their own compositions.”

Peter, who was a hit at last year’s Glastonbury Festival, is now looking forward to supporting Snow Patrol on 12 February at London’s Wembley arena, before continuing with his own UK tour. Looking to the future, he concluded, “It’s hard to plan for anything in the music world, but my dream is that I’ll still be making music which excites me , challenging myself artistically and pushing boundaries.”