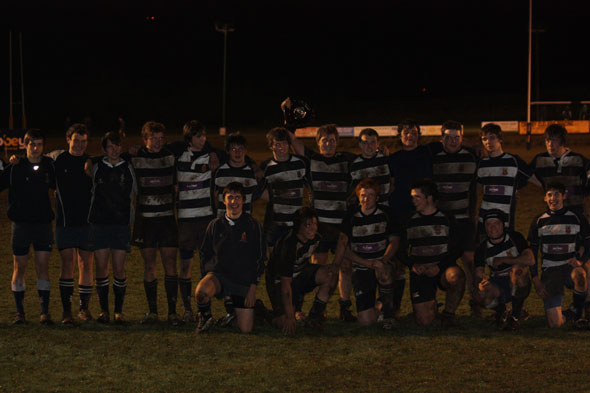 The Wallace High School 2ndXV fought back to win The 2ndXV Plate beating Ballyclare High School by 15-12 at Ballynahinch Rugby Club last Wednesday evening.
Ballyclare dominated the opening exchanges in terms of possession and were rewarded with a try and conversion after fifteen minutes. Wallace came back into proceedings through strong driving play and following a maul, the impressive loose head prop, Paddy Hylands went over for a score which Chris Nimmon converted.

At this stage, Jordan McMullan, Ross Irwin and skipper Ben Mewha were gaining the upper hand in the loose and the backs through Dean Irvine, Nathan McClatchey and Connor Saunders were capitalising on the quality ball.

Following a break from inside the twenty two Nathan McClatchey showed real pace on a counterattack which resulted in a penalty which Chris Nimmon kicked to put Wallace into a 10-7 lead. Ballyclare edged in front with a try to lead 12-10 but Wallace responded with a Ross Irwin try to lead 15-12 with fifteen minutes remaining.

Wallace held out to win their second piece of silverware in three days following their share of The Medallion Shield. Skipper Ben Mewha was understandably delighted with his teams performance, ‘The boys have worked extremely hard this year and this trophy is great reward for their commitment and dedication.’