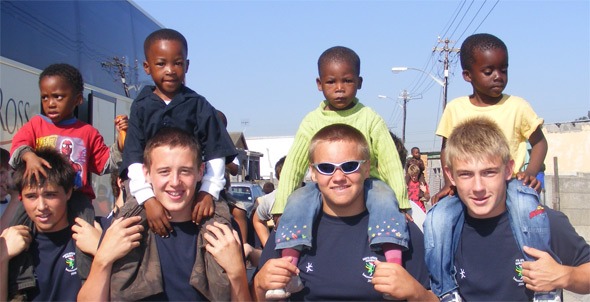 Thirty two pupils from The Wallace High School in Lisburn have recently returned from a trip of a lifetime to South Africa. The teenagers travelled to the land of the reigning World Cup holders as part of a Development Squad in preparation for this year’s Schools’ Cup campaign. 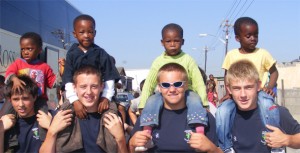 Months of fundraising by a committed group of parents led to a jam – packed itinerary, which began in Pretoria at the High Performance Centre where the squad spent three days rubbing shoulders with elite South African athletes and international rugby players from Italy and cricketers from Bangladesh.

Tour manager Ian Latham explained, “Starting at the High Performance Centre gave our coaching staff the opportunity to prepare our players for the much anticipated tour matches. The training and gym facilities were first class and really helped the players prepare for what was sure to be a demanding trip”. A trip to the Valley of the Waves at Sun City gave the boys a well deserved break from training and was much enjoyed by both staff and pupils.

Next on the itinerary was a two day safari at Entabeni Game Reserve. This proved to be one of the highlights of a great trip as all tour members got close to lions, rhinos, elephants, giraffes and many other animals in their natural environment.

Some of the boys were, however, perturbed at the initial briefing when they were told that they would be escorted to their chalets at night by a shot gun carrying ranger just in case any of the animals had wandered into camp. Thankfully the guns were not required and all members of the tour party moved safely onto the next part of the trip to Namibia.

The weather in Namibia was even hotter than experienced in South Africa and certainly made for a pleasant change from home where the boys were regularly updated by parents of the Northern Irish summer. Initially based in Walvis Bay, a small town on the edge of the Namib Desert, this enabled the squad to go quad biking and sand dune boarding in the desert, another memorable and very unique experience for everyone. From Walvis Bay the squad travelled to Windhoek, an old fashioned city where the squad had a chance to relax, play, train and enjoy several enjoyable meals out where the more intrepid tourists tried dishes such as kudo and crocodile.

From Namibia the squad travelled back to South Africa to their final destination of Cape Town, undoubtedly one of the most beautiful cities in the world. Whilst in Cape Town the squad spent several enjoyable evenings in the world famous Victoria and Albert Waterfront, including a memorable final tour meal.

All players also enjoyed the guided tour of the Newlands Rugby Stadium and particularly the chance to get pictures taken with the Rugby World Cup which resides in the Newlands trophy room. Our last morning was spent at the top of Table Mountain where clear skies enabled us to see for miles around the city.

A day spent in the Langa Township proved to be an emotional experience for the Wallace students. Tour captain Matthew Godfrey found the trip to be incredibly humbling. “The poverty in the area was startling and it made us all realise how fortunate we are to live in such a privileged society. We had the opportunity to coach the young children in Edendale Primary School and I know that the visit has inspired many of us on tour to fundraise for the area and to explore gap year volunteering opportunities”.

South Africa is really a rugby obsessed country and the pride they take in their national sport was clear every time matches were played there. Results were good and several tough encounters were always forgotten afterwards with excellent hospitality and friendship. For the record results were as follows:
A Squad

To sum up, Tour Manager Mr Ian Latham commented, “ This was undoubtedly a trip of a lifetime for both pupils and staff alike, both from a rugby and life experience point of view. I would like to thank the parents for their support in this venture and for giving their boys the chance to experience different cultures in Africa, as well as Mrs McBride for her support in the months leading up to the tour and throughout its duration. The pupils were excellent ambassadors for the school and their behaviour, attitude and rugby ability was a constant source of pride for me throughout the trip”.