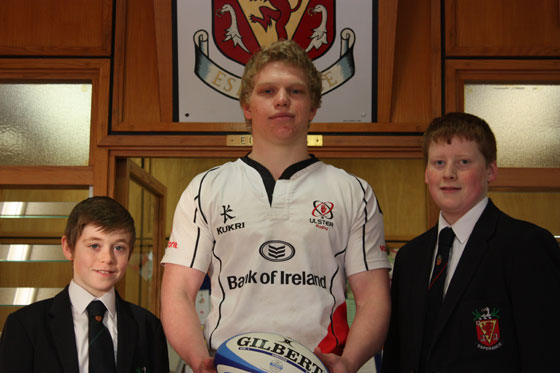 This Saturday The Wallace High School 1stXV entertain Methodist College in The Schools Cup 4th Round at Clonevin Park KO 11.00am. Wallace will be up against it as a powerful Methody unit have already beaten Wallace 23-7 three weeks ago. A large crowd is expected and supporters should arrive in good time for kick off.

Last Thursday they defeated a skilful Banbridge Academy side in a keenly contested affair by 12-10. Matthew Miller produced a man of the match performance from No.8 carrying the ball tirelessly and always getting over the gain line. He scored two excellent tries revealing much power and pace. Matthew Pentland kicked the conversion. There were also fine performances from Jamie Manderson , James Geddis and Ryan Malley.

On Saturday, Wallace produced their performance of the season defeating Bangor GS by 29-7. Up front the scrum was superb with Sam McCormick, Aris Epanomeritakis and the ever improving Nicky Woods putting much pressure on the Bangor front row. Matthew Moore showed considerable pace to go over for a try and this was quickly followed by a Matthew Miller touchdown. With the score at half time 12-7 to Wallace, the game hung in the balance.

Excellent continuity after the break allowed outside half Tom McKendry to go over and Sam McCormick powered over for the fourth after some excellent work from Ben Parker and Gary Dillon. Jamie Manderson’s pace and agility heralded a fifth try as Wallace finished the game strongly. Ben Pentland kicked two conversions.

These performances revealed much improvement in the performance of the U12 A team with more precision in the backline and ability to now get over the gainline from first phase possession.