A strawberry moon, the summer solstice, our home-grown Wallace stars joined by a choir from the land of the star spangled banner all combined to produce a summer concert to remember. Compered by Head of Music Mr David Falconer in his own inimitable style the evening provided, as he promised, “a great night” and a memorable last concert for Year 14.

The Hopkins High School choir had sung in venues in Galway, Dublin and Belfast before concluding their tour in Lisburn. Under the direction of their teacher Ms Erika Schroth they brought to the audience sophisticated unaccompanied singing drawn from a wide cultural tradition. They opened their programme with a lively Kenyan folk song Wana Baraka, followed it with O Vis Omnes and Wanting Memories but saved the best for last with a rousing rendition of the American folk/ gospel tune Unclouded Day which was met with rapturous applause. 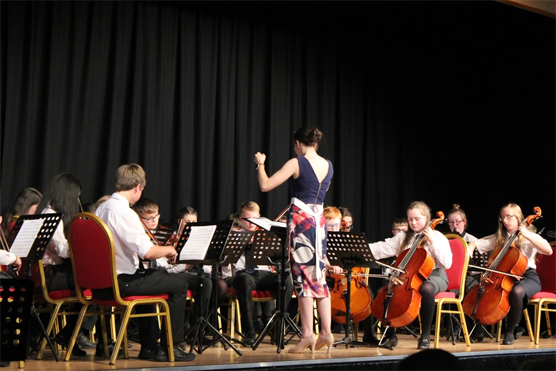 Earlier in the evening the audience had been delighted by a varied and often highly sophisticated programme. Year 11 pupil Amy Warke (now Amy Warke LTCL) and Julie Yeow opened the event with the Donizetti Sonata fur Flaute und Klavier. Julie is an exceptional pianist and was recently selected for monthly master classes with a famous Russian concert pianist. Further orchestral highlights were A thousand Years arranged by our own Miss Pascoe and played by the junior orchestra and the first appearance of the Prep Department’s orchestra. The young charmers played with fierce concentration offering the familiar spiritual O When the Saints and the popular Can You Feel the Love tonight. The warmth of their reception hopefully helped them “feel the love” in the hall.

Choral work is central to the life of the Music Department in Wallace and the many choirs featured did not disappoint.The junior chamber choir delighted with The Lord’s My Shepherd by Goodall ( think Vicar of Dibley! ) and had the best lyrics of the night in When I Grow Up from the musical Matilda. Cantabile, another junior choir, sang Rutter’s A Clare Benediction and followed it with a beautiful rendition of You Raise Me Up arranged by our Head of Mathematics Mr S Alexander. It was encouraging to see so many enthusiastic Year 8 pupils in Cantabile not least because the Year 11 “leavers” are being promoted to sing with Capella. The Year 11 girls showed their mettle by singing Cunnla ,a staple of Capella’s repertoire and proof of the depth of experience the pupils are gaining. The highlights of Capella’s contribution to the evening were a soulful rendition of Billy Joel’s And so it goes and the energetic and beautifully performed Seaside Rendez-vous.

The evening also featured solo performances by Erin Bailie, Joel Trotter, James Falconer and Grace Hamilton who were all applauded enthusiastically and who demonstrated the variety of talent in school.

All too soon the evening drew to a close as our trans-Atlantic visitors had an early morning flight. Gifts were exchanged as tangible remembrances of the day and the ever resourceful Mr Falconer mentioned new contacts (in restaurants!) for Capella’s New York tour in 2017. The choirs hope to reunite to sing together at a New York venue. The finale of the concert was heartwarming both in its demonstration of the power of music as a unifying force and the joy that singing brings. The stage was full of radiant young people cherishing the moments of singing together pieces reflecting their own distinctive cultural traditions. As the notes of The Londonderry Air died away the audience might have reflected on the words of those Swedish cultural icons ABBA and their oft sung phrase “Thank you for the music, the songs I’m singing”.

Speaking after the event Principal Mrs Deborah O’Hare said “Tonight was a first for us and will long be remembered. It was a pleasure and privilege for our young people to share music with the students from Hopkins High School. I never fail to be impressed by the richness and diversity of our pupils’ talents and I know they in their turn are immensely grateful to the staff for their passion, enthusiasm and expertise. I would also like to thank the PTA for the BBQ this evening and for all their practical help with so many school events. This has been a very special event for Wallace. ”