Congratulations to Capella, The Wallace High School’s chamber choir, on its very successful participation in the 116th International Classical Music competition at the Feis Ceoil, in Dublin’s RDS.

The choir had 6 weeks to prepare 8 pieces to competition standard. The works are highly demanding, some selected by the choir and others set by the competition. Singing set pieces greatly evens the playing field. If all choirs have to rise to the same standard, then it is much clearer to hear the quality of sound production, choral blend, the interaction of the parts within the choir and the communication to the audience, of the music.

Capella left Wallace on Richmond Coaches at 6am, some students having risen at 4am. After a breakfast at the Tara Towers Hotel, a warm up and a short coach journey, the day began at the RDS.

The audience and other schools were totally blown away by the standard of Capella, by their presentation, attention to detail, incredible sound and confident communication of the works. Lauridsen’s ‘Sure on this shining night’ was the first piece perfomed by Capella.

Year 14 student, Kathryn Wardil accompanied on the Steinway grand with a sensitivity and support that was highlighted by the Judge. The sound of the choir was incredible, from the pianissimo to the loudest climax and extraordinary descent into stillness. The performance of the highly complex King’s Singers arrangement of ‘Seaside Rendezvous’ received so many laughs and cheers from the audience, with many schools, teachers and musicians saying that they’d never heard a school choir of such professional quality. The Judge could find no fault, writing that Capella were not only outstanding perfomers, but also demonstrated virtuosic kazoo playing. To the room’s surprise, Capella was awarded 2nd Place.

For the previous 2 years, no choir has actually reached the award standard for the Feis Ceoil Irish Music cup. Capella’s old favourite ‘Dulaman’ and new comer ‘Hin Barra’ far over reached the standard, with great compliments on the strength and quality of the rich male tones. 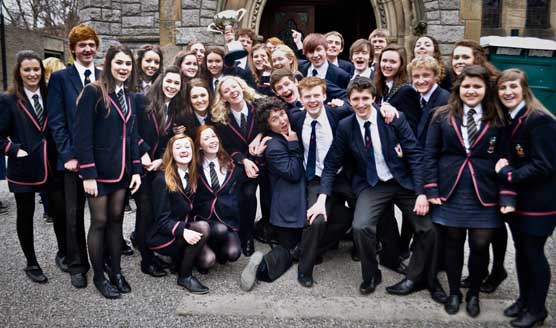 Similarly, The Fallon’s Cup for Sacred Music has not been awarded for 3 years, despite many attempts by school choirs from a variety of backgrounds. Capella performs sacred music exceptionally well, and this was instantly evident to the judge. It was clear from the outset of his comments that we had won.

Not only was the choir already quite well known from its Nationwide programme on RTE 1, so much so that some schools pulled out of the competition; the Wallace singers were quickly getting a reputation in Simmonscourt. The cameras came back again to record more interviews with Mr Falconer, Hannah Gardiner and Jonathan Scott, as well as filming more rehearsal preparations. The interviewer was astounded when told that we’d only begun rehearsing 6 weeks ago, as most schools begin this work in September.

While our reputation for amazing sound was gaining momentum, so was the recognition that the Capella members were extremely well turned out, exceptionally mannerly and deeply passionate about music. Comments made to Mr Falconer by the film teams, other judges, Feis Ceoil staff and the general public mentioned how well spoken and articulate the students were, how they tidied up after lunch, how they spontaneously burst into music and beautifully presented they were, both on and off-stage.

The support of Mrs O’Hare, Mrs Denise Henry (mother of past chorister, Daniel Henry) and newly wed Dubliner, Mrs Grace Bailey (aka Ms Bill) was hugely valued by the choir, as was that of our driver, Stevie, who came along to every performance.

It was with great pride that we drove to Stillorgan, did a Flash Mob in Eddie Rocket’s Diner before eating the best burgers in town and returning victorious to Lisburn at 1am.

When asked about his reactions to the experience of competing, Mr David Falconer, Head of Music at the Lisburn school said:

‘It’s an extraordinary achievement for Capella. They are a tremendously dedicated group of high achieving students, who still find time to perform to the highest possible standards. This is the first time that Capella, or I, as musical director, have entered a choral competition. To come away with 2 first place trophies and a 2nd place is fantastic. The experience of competing is unusual, it is an unnatural way to perform music, as it can be quite stressful, whereas normally, performing in concerts or services is relaxing. Standing on stage and wearing your heart on your sleeve, saying this is our very best effort on this given day takes a great deal of courage and I commend all the participating choirs who compete regularly in such events. Capella will go forward stronger from this experience, ready to make an iTunes mix at the end of June to showcase the huge talent and phenomenal choral blend that makes them worthy as winners’ 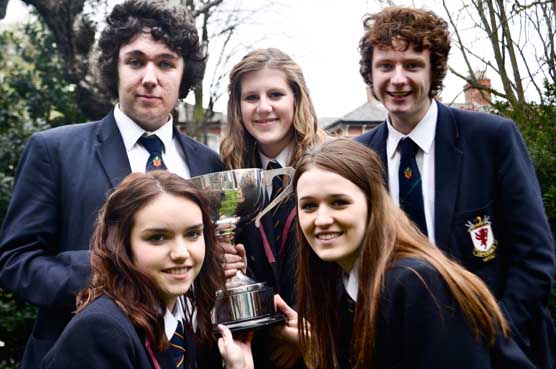