Triumph at the Movies 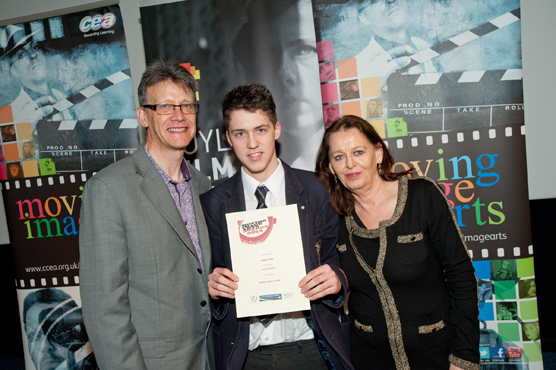 Molly Bolton and Reuben Trotter have achieved success at the Moving Image Arts Showcase 2014. The Moving Image Arts Showcase is an awards ceremony where prizes are awarded to the most outstanding short films created by students from the previous academic year. The event is organised by Cinemagic, in partnership with CCEA and the Foyle Film Festival. The best nominated student films are screened as part of the event and the winners announced. Reuben Trotter’s GCSE silent comedy ‘Tramp Temptations’ was awarded second prize in the live action film category, whilst Molly’s harrowing ghost story ‘Left Hanging’ was awarded 3rd place in the AS Film category. Earlier this year, Molly and Reuben were also nominated for awards at the Self-Made Film Competition hosted by the Mac. 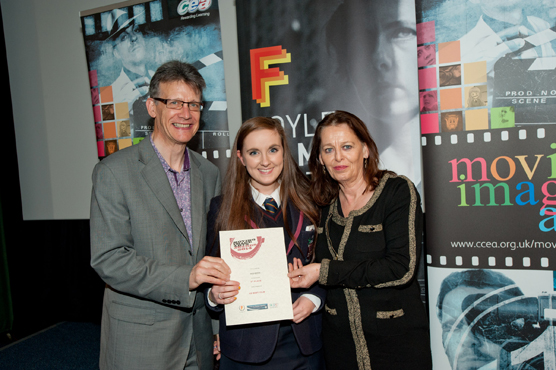 Molly and Reuben attended the awards ceremony on Thursday 27th November. They were accompanied by a group of aspiring young filmmakers from Wallace High School’s Moving Image Arts’ Department. Mrs Lucas, HOD of the Moving Image Arts, also attended the event and commented: “Molly and Reuben have produced excellent films, it was amazing to see their work on the big screen and experience the audience’s reaction. Everyone roared with laughter at the glorious mishaps of Reuben’s comical creation. Whilst the shrieks and gasps of terrified teenagers and their teachers were testament of Molly’s Hitchcock-like ability to frighten the wits out of her audience.”

Leo McGuigan, a young filmmaker and former winner, was guest speaker at the event. He encouraged students by sharing his love of filmmaking and described the many opportunities presented to him through studying Moving Image Arts. Leo is 20 years of age and he has just completed the production of his third film, the horror mystery thriller ‘Braxton’. Bernard McCloskey, Head of Education at Northern Ireland Screen, was on the judging panel and he complimented students on the high standard of film submissions. He spoke with confidence of the opportunities available for young filmmakers in Northern Ireland’s thriving film industry. Karen Kinghan, Filmmaker and Actress (Endless Life), presented the awards and Christine McFerran, Moving Image Arts Subject Officer at CCEA, also conveyed her enthusiasm for the creativity of this year’s cohort.