Wallace at the UK School Games

The Wallace High School were well represented at the prestigious UK School Games which took place last weekend in Manchester, with eight students donning the colours of Northern Ireland.

In the recent past there have been many students from the Lisburn school who have participated in the Games, including past pupil Alannah Stephenson (badminton) and current pupil Rachel Bethel (swimming) who went on to represent Northern Ireland in the Commonwealth Games which took place in Glasgow in the summer of 2014. The UK School Games is a multi sport event which seeks to replicate many of the situations faced by elite athletes in major multi sport events such as the Olympic Games. All the pupils from Wallace participated in opening and closing ceremonies and stayed in an Olympic style village with competitors from around the United Kingdom. 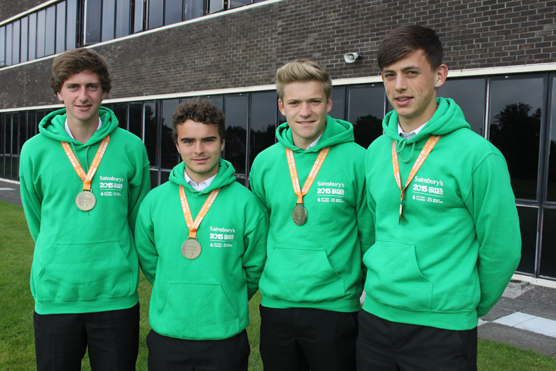 Pride of place this year must go to the four boys’ hockey players who were key players as their squad won a well deserved gold medal. After drawing 1 – 1 with England White on the first day, they comfortably defeated their Welsh counterparts 4 – 0 to top their group. The final on Sunday saw a game against England Blue who were swept aside 5 – 0 in an excellent display of attacking hockey. Year 13 pupils Scott McCabe and Andrew O’Hare were scorers for the team during the tournament, whilst Jordan Taggart was instrumental in the team only conceding one goal in their three games. Year 14 pupil Matthew Nelson played very well in attack and looks to be carrying on his excellent form from the summer when he represented the Irish under 18s in the Eurohockey A Division in Santander.

Jane Kilpatrick was a key figure as the under 18 girls’ hockey team won bronze beating England Blue in the bronze medal match. Having narrowly lost to England White in their opening group game, they came back strongly to defeat Wales 6 – 0 and qualify in second place. This is Jane’s second year at the Games and having gained a silver medal last year (alongside fellow Wallace player Zoe Jackson) will be delighted to medal again. 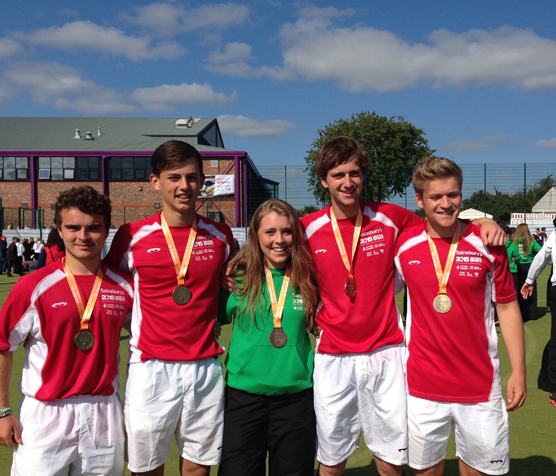 Year 9 pupil Rebecca Geddis represented the squad in gymnastics and now looks forward to the Olympic squad trials in Dublin in December, a fantastic achievement for our highly talented gymnast. She has been busy in recent months competing in the Irish Nationals, where she won Gold on the Beam and the Bars and Silver overall. She also completed in the Flanders International Team Event in Belgium, where her team came 5th overall and she came 20th overall. All at Wallace look forward to following her progress in the coming years and particularly in the all important trials in December.

The final two pupils to participate were fencers Eve Megaw and Charlotte Slater who helped their squad to a commendable fourth place overall with Charlotte ninth and Eve fifteenth in the individual women’s epee. Again both girls have been busy in recent months and also have lots to look forward to in the coming months with Charlotte heading off to Manchester in October and then an exciting trip to Krakow for the World’s in February. 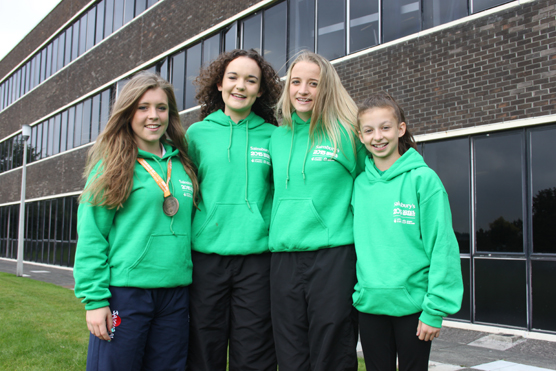 It would also be remiss not to recognise the outstanding achievements of Year 12 swimmer Rachel Bethel over the last few months. Her list of accomplishments continue to grow making everyone at the Lisburn school very proud. Rachel is a member of the Ulster High Performance Squad and Irish Senior Squad, has represented Ireland this year at the European Games, June 2015 in Baku, Azerbyjain (one of only six swimmers in Ireland to qualify for the Games). She also represented Ireland at the World Junior Championships recently in Singapore (one of only seven swimmers in Ireland and one of three Ulster swimmers) and will soon return from representing Northern Ireland at the Junior Commonwealth Games in Samoa in September 2015, the youngest of the five swimmers at the games.