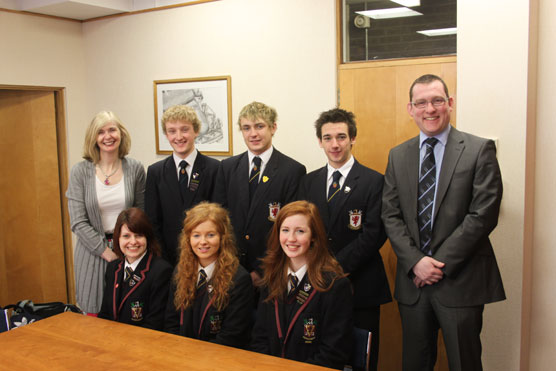 Wallace boasts a baker so skilled she should be in the Great British Bake Off so invitations to coffee and scones are highly prized! In celebration of their successes eight Year 14 students who completed YASS modules with the Open University met to “chew and chat” with members of the Wallace Leadership team to share their thoughts on the value of YASS.

The Young Applicants in Schools and Colleges Scheme (YASS) gives Sixth Formers the opportunity to take university modules whilst still at school. All resources are provided by the OU, students work online and can participate in online forums with fellow students.

The Wallace eight described with enthusiasm the benefits of such independent study and the confidence it has fostered. Although students are formally given simply a pass/ fail outcome they can access a full analysis of their submission. Tutors grade work into five bands and the students were delighted to see that not only had they passed, they had passed with flying colours, with the majority of gradings in the top band.

The students hope to pursue a variety of courses next year. Hannah Gardner has an offer to read Law at University College Oxford whilst Ben Simpson intends to read Actuarial Science in company with current Head Boy Matthew Ballantyne.

Jack Connan hopes to read Dentistry after his gap year whilst other members of the YASS cohort have offers for Medicine, PPE, Biomedical Science and Psychology. All the students agreed that the skills of time management , editing and referencing which they had developed through their studies were invaluable and had extended and complemented skills gained through A2 study.

Dr Nicola McIntyre who acts as the school’s link tutor has already met with over 50 Year 13 students who have expressed interest in the scheme. She will be returning to Wallace in March when students will formally select courses.

Gifted and Talented Co-ordinator, Mr Michael Lowry, said “The YASS scheme really proves its worth when students apply for high tariff courses such as Medicine as some universities have openly noted they use YASS as a tie breaker in oversubscribed situations. It also gives students first hand experience of university level work prior to university and that can only be a confidence builder.”