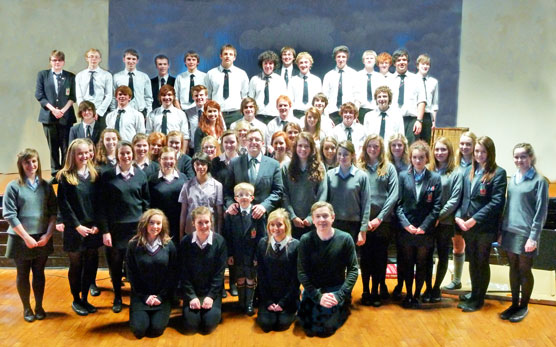 Recently Capella, the chamber choir of The Wallace High School, had the great privilege of working with the Education team from Anúna, Ireland’s National Choir, and their director and composer Michael McGlynn. Anúna, who will be 25 years old in 2012, recently created an acclaimed Education Programme that has brought them to fifteen different choral and community groups throughout the Republic and Northern Ireland in the last year.

According to Michael “Anúna have a very close bond with Northern Ireland and currently seven of our singers come from here including a past-pupil of Wallace High School, Vicky Warwick. The extremely high quality of music teaching in schools in the North combined with a natural talent for singing makes each visit an utter pleasure for our Education team”.

Led by Michael, Vicky, Antrim singer and violinist Tara McNeill and Anúna chorus master Miriam Blennerhassett the team came to the music department on the invitation of Head of Music and Capella director, Mr David Falconer. Capella has a very wide repertoire of Capella choral music and performs many of McGlynn’s works on their various tours in Europe and the USA. For the students, it was a chance to sing these works for the composer, to be put through their paces rigorously and to come away with a new confidence in their own performing ability.

Contralto Miriam Blennerhassett gave an excellent talk on consolidating breathing technique, while the members of Anúna moved through the choir giving guidance and encouragement to the singers.

The choristers were asked to take to the stage and to comment critically on each other as they performed, finding positive and negative aspects of their colleagues’ presentations. It was a chance for Capella to be both audience members and performers. The Anúna team’s effortless way with the students, and Michael’s clarity of teaching and attention to detail will have greatly enhanced Capella’s already high standards and will leave them with many lessons applicable not just to performing, but also to confidence in interviews, exams and in team building.

“I was a little nervous coming back to Wallace in the role of a workshop leader” said Vicky” but the opportunity to pass on some of the techniques and experiences I have had in Anúna to the students at the school was an opportunity I just couldn’t miss! They made us feel so welcome, and the masterclass was brilliant fun for all of us.”

The Anúna team were delighted to be in Northern Ireland, were very impressed with the huge amount of their own music in Capella’s repertoire and they look forward to meeting some of the students again at the first Anúna International Summer School at Dublin’s National Concert Hall this July. Before returning to Dublin the group also paid a visit to the Methodist College in Belfast where they undertook a similar successful workshop with the chapel choir under the direction of Ruth McCartney.