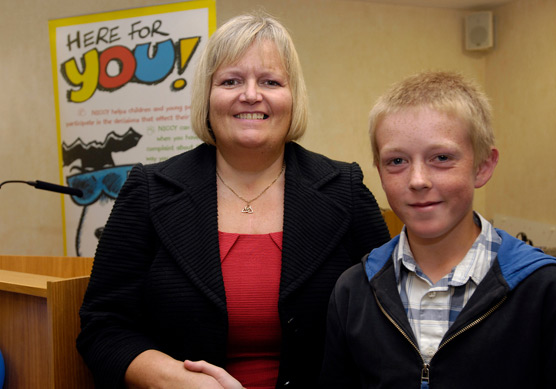 One of Wallace year 10 pupils has been demonstrating his skill in photography and film making by having is work recognised by the Northern Ireland Commissioner for Children and Young People (NICCY), Patricia Lewsley, at a prize giving event this week.

Children and young people from across Northern Ireland were asked last summer to show the Commissioner what is good or bad about play where they live.

The photographs and videos submitted have helped NICCY tell Government want it needs to do to make play and leisure better for all children and young people in Northern Ireland, as part of the ongoing Make it Right campaign.

Sam scooped the top prize for his video entry. The judges felt it was a well produced video which conveyed the problems of play and leisure in his area.

Sam, said: “There are not very many places to play football where I live, which is why I wanted to make a video highlighting this. I used lots of clips of people playing football in their garden or on the road, but wanted to get across that we need a better playing field near where we live. I thought the other videos would probably win, but I’m really happy that I won. If I get a chance I am going to make more videos in my spare time as I really enjoy it.”

More than 70 children and young people submitted entries to the ‘Here we are… Nowhere’ competition and some of the entries will be exhibited this weekend, Sunday 20 June at the Ulster Museum as part of the Play Day NICCY is hosting.