Students at The Wallace High School recently had the opportunity of a lifetime to star in a major feature film currently being directed by Belfast born Nick Hamm. “Killing Bono” starring Ben Barnes and Robert Sheehan is based on the autobiographical book “I was Bono’s Doppelganger” by The Daily Telegraph’s rock critic Neil McCormick.

Killing Bono tells the story of the young Neil McCormick whose only ambition was to be a world dominating Rock legend. Although this quest was expertly planned he faced an unforeseen musical nemesis, a boy sitting on the other side of the classroom had plans of his own and that boy was Bono.

The school was first approached through Northern Ireland Screen in early November and after a number of visits by a location scout and Director Nick Hamm Wallace was selected for the early Mount Temple scenes of the film. A number of locations within the building were magically transformed back to the 1970s with phenomenal attention to detail.

Principal, Deborah O’Hare commented, “Welcoming a film crew to Wallace was an exciting, unforgettable experience. We are always keen to work with the community and employers to offer a varied extra-curricular programme and enriching experiences for our young people; this was a very successful venture. Our Sixth Form students, who were film extras, had a unique and revealing insight into the world of film making.”

Head of Moving Image Arts David Cleland explained, “This was a unique opportunity for our students to be part of a major film. The entire school community enjoyed the amazing buzz of an entire cast and crew filming on our site whilst two hundred of our senor students had the chance to act in the movie.”

Lower Sixth student Chloe Harris went on, “I’ll never forget this exciting experience. From wardrobe fittings to hair and make up, I loved the whole experience and can’t wait to see how we all look on the big screen! The actors were very friendly and we had a lot of fun.” 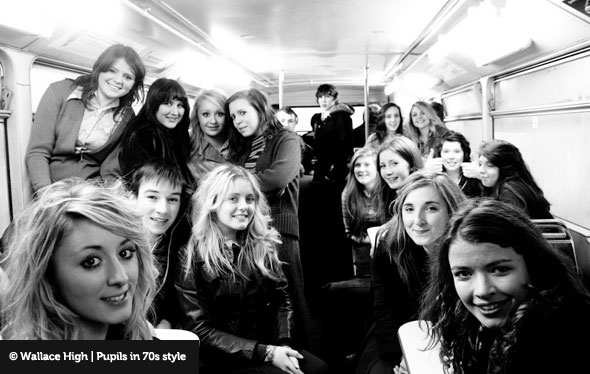 David Cleland concluded, “Meeting respected producers such as Mark Huffam and Director Nick Hamm has been a unique learning experience for our Moving Image Arts students as has spending time on location. It truly brought learning to life for them”.

During the shoot there was much excitement when pupils in the Preparatory Department received a surprise visit by both Ben Barnes and Robert Sheehan.

“Killing Bono” should hit our cinema screens at the end of 2010 and no doubt the entire Wallace community will be looking for a glimpse of their friends and familiar buildings on the silver screen.

We are obviously limited as to what photos we can use at the minute and plan a web showcase once permission has been granted by the production company in the future.

Please do not repost any of the above photos.