Wallace Through to Ravenhill Final 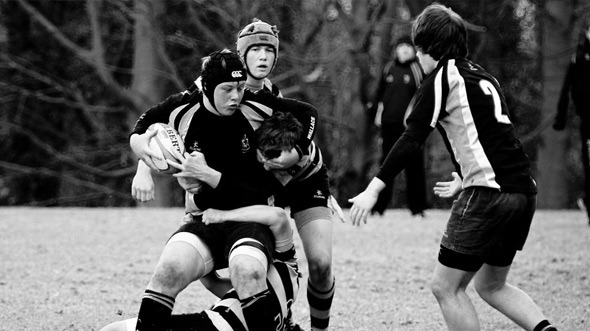 Wallace progressed to the final of the Medallion Shield defeating RBAI 10-8 in a keenly contested match at Foxs field, Campbell College, Belfast on Saturday 13th March.

This was always going to be a close encounter the teams having drawn 8-8 earlier in the season. Wallace kicked off playing up the slope. Roared on by a big crowd the game was tight in the tense opening 10 minutes.

With scrum and lineout functioning well and with powerful runs from captain Zack McCall(8)and Andrew Coffey(5) creating good field position, the pack slowly started to dominated their opponents up front.

A long period of pressure in the Inst 22 led to the first score. From a series of well controlled mauls and drives for the line, Captain Zack McCall(8) broke and dived over for the first score.

5-0 to Wallace. Inst responded immediately but another well organised drive from a lineout gave the Wallace pack gave their second try 5 minutes before half time. Prop Thomas McInally scoring from close range, his first try of the season!

Inst threatened briefly towards the end of the half and were rewarded with a penalty. Half time score 10-3 to Wallace. A major blow to Wallace was the loss of their captain at half time. A reshuffle saw Stephen Hinds partner Ralph Lavery in the second row with Arron Gilkinson replacing Thomas McInally at prop.

The second half followed the same pattern as the first. Wallace again dominated possession and territory but were unable to convert a number of chances as the midfield was very congested.

Centre Jordan Gratten(13) had another strong game and proved difficult to stop making a series of gainline breaks. Backrow forwards Cal McIlwaine(7) and Rhys Lynch(6) were tireless in this phase of the game and their defencive work in particular at ruck and around the pitch was very impressive.

They both made a huge number of tackles and spoiled the opposition ball ensuring that Inst didn’t threaten until the final few exciting minutes. With 3 minutes to go Wallace were awared a penalty in the opposition 22 and elected to kick for goal. The kick hit the post and rebounded into play.

Inst had nothing to lose and attacked. They ran the ball very effectively and all but scored in the corner. A last minute tackle by scrum half Peter Weir led to a knockon and Wallace scrum. The line was cleared but the excitement wasnt over yet! Inst won their lineout and attacked again through their backs this time to score in the corner. That made it 10-8 to Wallace.

There was just time for the conversion. A successful kick would force a replay! The kick was missed and as the final whistle blew the crowd invaded the pitch. Wallace had won!

What an end to a game. Coach Jonny Reid praised both teams efforts. “Inst are a very good side. We knew it was going to be close but scoring two tries to Inst’s one I think the my boys thoroughly deserved their victory.” “They executed very well under pressure throughout the game and were unlucky not to get a few more scores in the second half”.

“All the coaches working with the team are satisfied that their hard work is coming together at the right time and we look forward to the final at Ravenhill against Campbell next Monday”.