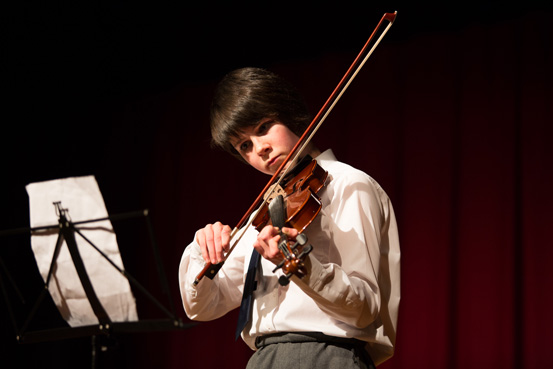 A milestone in the induction of Year 8 was reached on Tuesday 23rd October with a successful concert featuring all Year 8 pupils. Masterminded by Mrs Wendy Davison and Mr Steven Alexander musical directors of Cantabile, Wallace’s junior choir, the event was a heart-warming and exuberant evening of song and instrumental pieces.

Compered by Head Girl Kate Millar and Head Boy Tony Gordon the programme featured individual items from each class set and a final ensemble piece by the Year group.

An appreciative audience of family and friends made for a full house as the talents of the new pupils were showcased. Instrumental contributions were varied; clarinet, flute, drums and piano all featured. Content ranged between the familiar and well-loved rag time of Scott Joplin played by Sarah Scott to Soiree Polka by Foster performed by Julie Yeow.

Wallace’s new promising vocalists provided further highlights with songs from the familiar musicals Grease and Oliver contrasting effectively with more contemporary pieces made famous by Adele and Taylor Swift. A rousing climax to the evening was provided by ‘We go together’ from Grease which also featured a terrific saxophone solo by Year 13 student Graeme Martin. 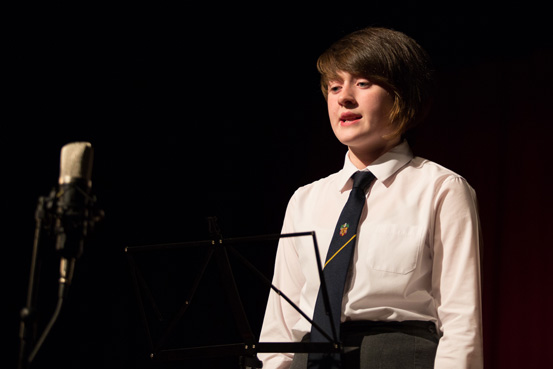 Head of Music Mr David Falconer expressed his thanks to all the pupils who had added to the success of the evening and paid tribute to the expertise of Mrs Davison and Mr Alexander. Wallace’s reputation for choral and instrumental excellence is well known throughout Northern Ireland and beyond. Both Cantabile and Capella are busy preparing for a crowded programme of engagements and concerts in December.

Light refreshments served in the school canteen gave an opportunity for congratulations, chat and even some “friends reunited” as past pupils discovered their former classmates looking only a little older! Principal Mrs O’Hare commented “It was a wonderful evening showing our new pupils’ talents which certainly bodes well for the school’s musical future.

I am also delighted with the pupils’ enthusiasm for school life and I am really looking forward to seeing the Year 8 pupils play an important role in our school family. It has also been a pleasure to see and hear former pupils reminiscing and we are proud that they have entrusted Wallace with the education of another generation