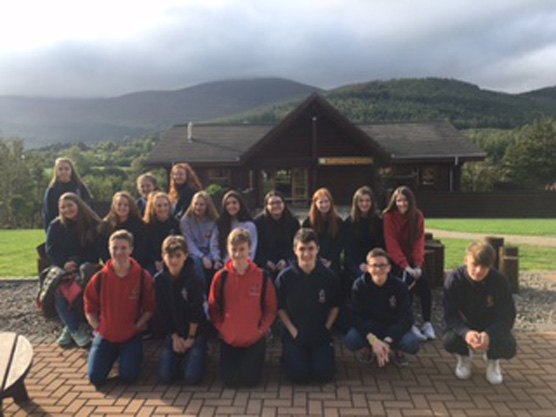 Year 11 GCSE Journalism students enjoyed a 5 ***** day at a 5 ***** facility when they visited Daisy Lodge, the flagship therapeutic respite centre run by the Cancer Fund for Children. The pupils were guests of the charity at one of its annual Open Days to showcase the work and act as a ” thank you” to schools who have actively supported the charity’s work and vision. Daisy Lodge, a £3,000,000 project, opened two years ago and has transformed the charity’s Newcastle facilities. More than double the size of its predecessor, Shimna Valley, Daisy Lodge has already hosted many hundreds of families offering them luxury hotel standard accommodation in the most beautiful of locations with panoramic views of the Mourne Mountains. Arriving at the facility the Year 11 pupils were almost speechless as they gazed out from the huge picture windows at the idyllic rural scene which even comes complete with a few fluffy sheep!
Schools’ worker Rebecca Oates welcomed the group warmly and presented a Senior Teacher Heather Gracey with a certificate recording our amazing 2015/16 total of £11,005 which also gave examples of what the money could do. The Wallace students were especially touched by the fact that £5,000 paid for 100 teenagers to enjoy a weekend at Narnia, the fund’s specialist teenage facility. Broadly based on the design of alpine ski lodges Narnia had been open for 10 years; the fund has been fortunate to secure lottery funding to redecorate and refurbish the facility. Teenagers who visit Narnia can expect to experience exciting outdoor activities ( even in bad weather), lots of teenage friendly food and a quiet zone for relaxation. 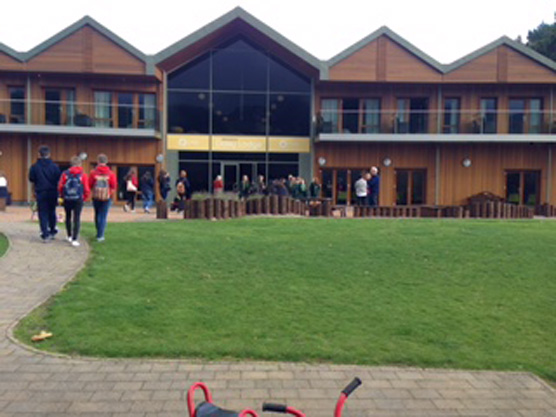 During the visit the Wallace pupils were able to see the entire range of facilities available at Daisy Lodge which range from a fully equipped gym to a play room for tiny tots, from a “starlit” beauty treatment room to a large outdoor circular swing and football area. Two pupils ( Jack Dillon and Esther Follis) just couldn’t resist the temptation of modelling the trademark Daisy fluffy robes and the majority of the group could not resist the charity’s hospitality as constantly replenished plates of tray bakes and flasks of tea and coffee passed before their eyes. The pleasures of eating aside the Journalism students sent to work with a will as the visit provides source material for a Controlled Assessment on a topic of local interest. Local sporting hero Rory McIlroy has a close relationship with the fund and pupils enjoyed posing with his autographed golf bag which is in pride of place in reception; they also had fun trying out the bunk beds, the gym, the circular swing and the delights of the lodge’s restaurant!

Following the guided tour students were well equipped with the facts and trivia essential for a good article and they even shot their own accompanying pictures with some excellent direction from Mrs Weir. The charity’s literature provides meticulous information about what donors’ money can do and the Wallace students were impressed by the simple practical schemes such as petrol vouchers to combat the cost of constant travel. They were also startled but very moved by the Narnia ” lift ” anecdote; as the project neared completion the team remembered they needed a lift! The cost? A mere £25,000 which was donated by one Newcastle resident! The pupils were also treated to a session with Joe of The Gathering Drum who is very quick to identify the less skilled musicians in the group. Mrs Weir and Miss Gracey fortunately managed to evade humiliation by politely allowing teachers from another school to have the remaining drums!

Year 11 student Ella Neely said:
” It was such a good trip. I didn’t think it would be so lovely and I had imagined that it would be quite a sad place but it felt really happy. We all feel really proud that Wallace was the top fundraising school last year and now we have seen what we are contributing to we’d like to do even more.”
Head of English and Journalism Mrs Gillian Weir said:
” This was my second visit to Daisy Lodge with GCSE journalists and it is such a pleasure to see the students’ reactions to the location and the facility. These students participated in last year’s hugely successful ReadOn and I know they shared my pride in knowing that as a school we have contributed to supporting children,young people and families who really deserve the respite this luxurious facility offers. We really appreciated today’s invitation and have enjoyed everything immensely.”