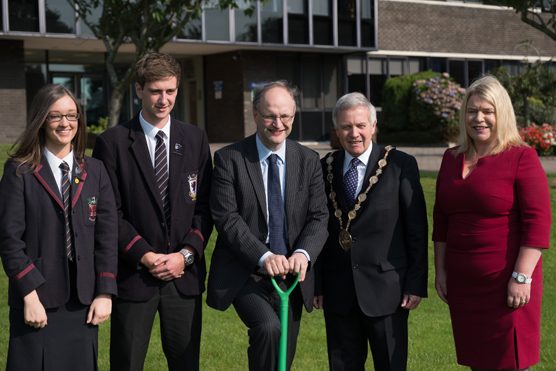 Education Minister Mr Peter Weir has been in the news recently for his robust rebuttal of previous policies regarding the AQE and GL examinations. His statement authorising the formal preparation of pupils for both tests and his suggestion that primary schools could host the tests have both met with considerable approval from many parents and teachers.

His visit to Wallace was to see for himself the beginnings of the substantial School Enhancement Programme actioned by the previous Minister for Education. Wallace is set to benefit from an ambitious £3.2 million project which will bring dramatic changes to the school’s landscape. At the core of the development is a new block which will house Art, Moving Image Arts and Home Economics ; the existing building will also see expansion. The school’s Technology Department will gain considerable additional accommodation and the PE Department will enjoy a very considerable enhancement of its facilities with the construction of a Fitness Suite which should be unequalled in Northern Ireland. Other works include a link between the Preparatory Department and the main school building and the refurbishment and reconfiguration of the spaces vacated in the main building. 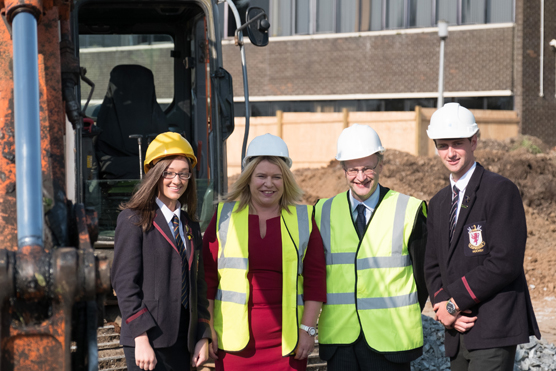 Principal Mrs Deborah O’Hare was delighted to welcome the Minister who was accompanied by Anne Conaty from the Department of Education’s Investment and Infra-structure Directorate; the Minister and his party had the opportunity to meet with the project architect, Dominic Carson, Mrs Sandra McCabe Chair of the Wallace Board of Governors and Mr George McComish, Trustee and Chair of the SEP governance team. Mr Weir enjoyed a tour of the existing school building and was able to see both the plans on display and visit the preliminary site works where he showed boyish enthusiasm for the large diggers! Mr Weir also cut a sod close to the site of the extension to the Technology Department in the main building. He also had an opportunity to read some letters written by pupils to Principal Deborah O’Hare exploring opportunities for recycling in the existing building and making suggestions about how the new facilities could be eco friendly. Current Head Girl Emily Howard and Head Boy Jordan Taggart both enthusiastic hockey players were on hand to describe how the school’s now legendary ” smurf turf” has transformed our hockey facilities on site. In response to the Minister’s query as to the ” added value” achieved Jordan noted that the boys’ hockey squad completed the historic double of winning the Burney and McCullough Cups. They even managed to be serenely unenvious of the facilities they will not get to enjoy!

Another warmly welcomed visitor was the Mayor of Lisburn and Castlereagh Mr Brian Bloomfield, MBE. Mr Bloomfield served as Vice-Principal Pastoral for 20 years and was also a highly successful coach of the school’s XVI. Former pupil Chris Henry captained one of the school sides which contested the Schools’ Cup final during this time and Mr Bloomfield expressed his delight that the long awaited expansion to the school’s facilities was finally becoming a reality and assured the other guests that he hoped to see them at some sporting finals this year.

Speaking during the visit the Minister said:

” Ongoing investment in our schools estate is essential if we are to continue to provide a high quality education. As well as the investment in our schools’ estate it also helps the local economy and secures construction jobs. I thank everyone involved in this project for their hard work and commitment in taking the project forward and wish everyone well for the future.” 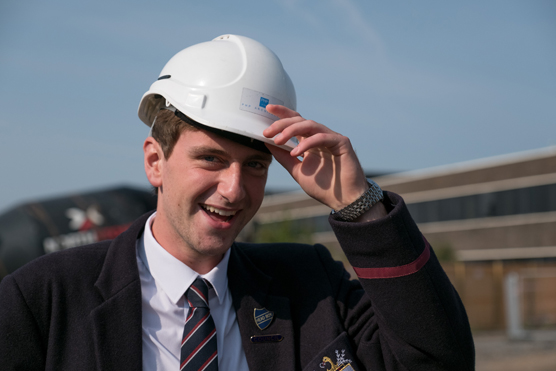 ” The sun shone on us today and I am sure that is symbolic of the future of this SEP project. I am proud to stand in the tradition of distinguished Head teachers of Wallace who over the decades have shown vision and tenacity in pursuing the development of the school’s facilities. I am confident that this extension will enable us to improve our already excellent standards. I would also like to pay tribute to the work of our Maintenance Team who,day by day, ensure that our existing facilities are presented to a standard rarely equalled in other schools.”