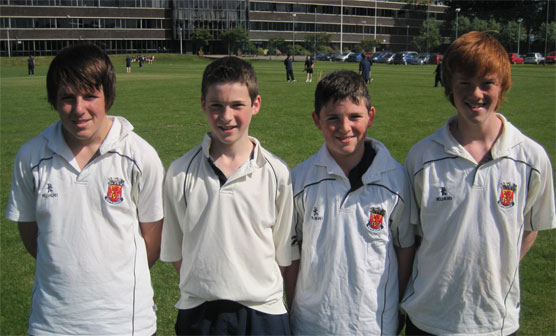 Last week was another busy one for cricketers at The Wallace High School with a mixture of cup and league fixtures. Overall results were positive and all teams still have much to play for this season.

The 1st X1 played Sullivan Upper in their latest Schools’ League fixture and were defeated by 7 wickets with only nine balls left. Bad batting contributed to their demise with only Scott Hughes (36) and Matthew Ballantyne (35) showing the necessary application in a below par total of 103. The key Sullivan batsman was also dropped early in his ultimately match winning innings, once again proving that “catches do indeed win matches”.

At The Thiepval Oval, the under 15s continued their fine season beating the same Hollywood school by 117 runs to claim 8 vital points in the overall fixture. Zack McCall (26), Jake Clements (62 not out) and skipper James McCallen (63 not out in only 32 balls) were the only batsmen required in the mammoth 185 scored in only 20 overs, before Matthew Crossley (4 – 23) and Andrew McStea (2 – 20) wrapped up the game with some excellent bowling. This team can now go into their cup game versus the traditionally competitive Strabane High School with much confidence after yet another strong performance.

On the front pitch at school, Wallace under 14s looked set for defeat before a fantastic, hard hitting innings from Ross Kelly swung the game in their favour. Having restricted Sullivan to 101 in their 20 overs, Jonny Wilson the pick of the bowlers with 3 – 5, they looked to have run out of overs in their chase. Sullivan, however, had not reckoned on the power hitting of Kelly who struck 33 not out from only 15 balls to win the game (and the 6 overall match points) with two balls to spare.

The under 13s travelled to Sullivan and returned with an excellent 39 run victory. The key players in this game for the Lisburn lads were Ryan Getty (46 not out) and Ross Barnett (10 not out) in a team score of 111 in 20 overs. Daniel Ballantyne (4 – 7) and Philip Hylands (2 – 10) were the standout bowlers, both continuing their own good personal form.

Finally, the under 12s had two games over the weekend. On Friday they defeated Methody in the first round of their cup competition, Ross Waite scoring 50 and Adam Heaps taking 4 – 7 as they triumphed by 51 runs. Onto Saturday and perhaps a little tiredness had set in as a talented Sullivan team claimed the two league points on offer with a reasonably comfortable 6 wicket victory.

Overall the final total in the league fixture was Wallace 18 – Sullivan 16. This means that Saturday’s overall league fixture versus Methody is a top of the table encounter. The Lisburn lads have a tough task ahead of them as they require victories in at least four of the five games to have any chance of getting themselves into the final of the competition. They do, however, know that anything is possible in cricket and will take much heart from that. The 1st X1 and under 15s will travel to Belfast, whilst the under 14, 13 and 12 squads will be at home. The action gets underway at 9.00am and all support is very welcome.