WALLACE High School pupil Jonathan Scott has certainly shown that he is made of the ‘write’ stuff.

For the Moira teenager has just scooped an award for coming top in Northern Ireland GCSE Journalism and the Ulster Star is keen for everyone to read all about it.

And not only can he bask in the glory of sitting at the top of the journalistic tree in the province, there is also tangible proof of his considerable talent in the shape of the Ulster Star Cup, awarded by the Clonevin Park school to their top budding reporter each year. 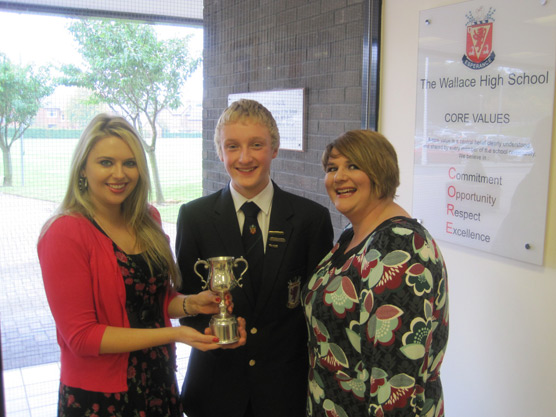 It has been quite a success story for Jonathan, but like in all good tales, behind every good man there is a good woman, with the 16-year-old keen to share his glory with his proud teacher, Gillian McGarry.

Miss McGarry is no stranger to lifting gongs herself, having been named Teacher of the Year for Enterprise in the recent Northern Ireland awards, where she was nominated by, you guessed it, Jonathan.

Both are naturally delighted by the result, with his proud teacher commenting: “Jonathan has been a pleasure to teach over the past two years, demonstrating flair and ingenuity in his approach to his studies.

“GCSE Journalism is a relatively new qualification but one that our students have found enriching and innovative.

“I would like to thank the Ulster Star for putting their time and effort into encouraging young writers to undertake journalism as an academic qualification. The support shown by the local media and by former Wallace students has been overwhelming. Jonathan and his classmates benefitted from a range of visits to The Belfast Telegraph and photojournalism exhibitions, making their learning experiences very real. Jonathan is now looking forward to a work placement with The Ulster Star.”

Jonathan added: “I am grateful to my school and in particular want to pay tribute to my teacher, Miss McGarry, for giving us the opportunity to study something different and rewarding like Journalism. Her inventive drive in the classroom does not go unnoticed. Few schools offer the subject for GCSE and I am so glad I chose it.

“The GCSE was heavily coursework based (75%), with five pieces being submitted: a front page story, a two page feature article, a movie review, a celebrity gossip column and a back page sports round up.

“Freedom and choice were the buzz words. We were encouraged to research and write about topics which really interested us – from horse-jumping to healthcare, we had it all. No two Journalism classes were ever the same – I learnt a great deal from visiting speakers and from the range of trips offered to give us a glimpse into the world of work

“It would be unfair of me however to neglect to mention the rest of the school: the teaching staff in Wallace helped me to come joint top in my year in my GCSE results with 9A*s and an A.”

Jonathan is busy outside the classroom too: “From debating to acting, singing to writing for the school magazine, there’s always something on offer in Wallace!”

So, does Fleet Street – or even Bow Street – beckon for that matter? That’s in the future, but for now he’s delighted to be making headlines as well as writing them.