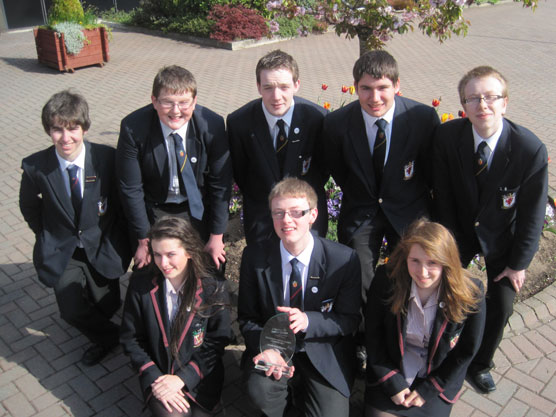 A Wallace High School Young Enterprise Company has managed to scoop the South Eastern Company of the Year award at the Young Enterprise Regional Awards held on the 6th April at the Millennium Forum in Londonderry. “GENERATIONS”, a company that specializes in producing and launching local artists into the music world, has made waves in recent months with strong sales of Mark Wells, a fellow Wallace High pupil’s debut album, and also a debut album from first year Amy Montgomery.

The ceremony, which congratulated all regional winners of Company of the Year in Northern Ireland, along with several other categories, saw Generations beat off stiff competition to lift the trophy and a gift of one hundred pounds for the company. Generations and the other regional winners are now through to the Northern Ireland Final, a gala dinner to be held on Thursday 19th May, in Belfast City Hall.

Managing Director of the company, Aaron Callaghan, commented “It was a fantastic moment for us when we were announced as the winners for the South Eastern Region, particularly because of the high level of competition we faced in the category. We are all very much looking forward to the final in May.”

Young Enterprise is a social and educational charity set up to educate school pupils on how to run a business. It allows the pupils to run their own business and sell their products for a year. The only support the pupils receive is from their teacher and a business advisor.