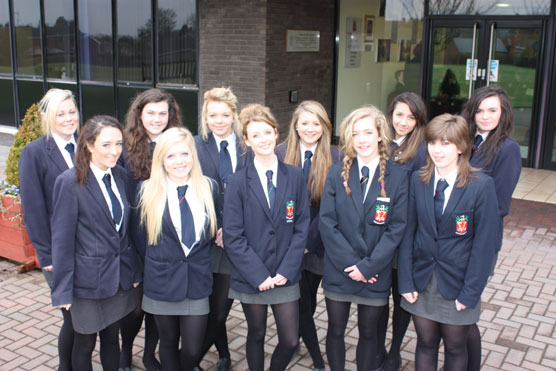 On Monday Wallace High School Intermediate Netball squad played Cookstown High School in the Quarter–Finals of the school’s Cup.
This was a very closely contested game with Wallace just edging ahead in the first quarter by 7 goals to 6.The defence of Aimee Donaldson, Hannah Shelcott and Tamilla Matchett was under extreme pressure throughout.

The second quarter was won by Cookstown with the half time score ending as a draw, 12 goals all. Wallace had thrown away several chances with nerves showing in their play. At half time just when Cookstown had settled Wallace changed its Goal keeper to Vicky Napier and this resulted in continuing pressure by unsettling the Goal Shooter.

By the end of the third quarter the Cookstown squad was beginning to dominate and the Wallace girls had to work very hard to try keep the goal difference to one.

In the final quarter and with the centre pass Wallace levelled the score and eventually pulled ahead by three goals in the last two minutes of the game. Michaela Neill fed the ball consistently well to Claudia Philpott and Chantelle Thompson from the edge of the circle and under provocation from the Cookstown Goal defence both Wallace girls were able to keep their cool and shoot accurately.

Alice Green the Wallace centre worked very hard in attack and Cookstown was unable to do anything about the superb marking from a very determined Wallace high school squad and the final score was a resounding win 25/23 to the Lisburn Side.

The Player of the match was Wing Defence Tamilla Matchett who played with tenacity and determination throughout.
The squad is coached by Mrs Dawn Baxter and managed by Miss R. Farr: