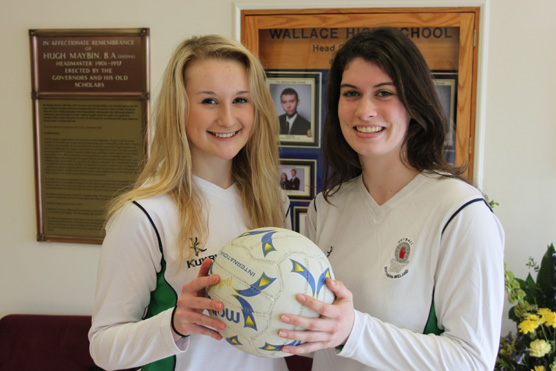 Wallace High School netball players Claudia Philpot and Julie Whitten have been selected to represent Northern Ireland on the U17 and U19 squads in next month’s European Championships.

Both girls  have been training with Northern Irish squads for several months and were delighted to hear this week that they have each made the final  FENA selection.

Claudia who will be representing Northern Ireland at Under 17 level,  will face England, Scotland and Wales on  11th-13th March in Dublin. However, she is no stranger to the FENA court, as she was a member of the Northern Ireland U15 squad last year who played in the Second Division against three U17 squads. Her team went on to defeat Switzerland and the Republic of Ireland and gave Gibraltar a run for their money, nabbing the Runners Up place. Claudia also plays on the Belfast Ladies U16 squad who are currently ranked first in the table, and is on the Wallace High Intermediate and Senior teams.

Deputy Head Girl Julie, will be jetting off to Queensferry in the North of Wales at the same time, and will also be up against the English, Scottish and Welsh teams. Julie has been playing with the squad for two years now, and previously played for the U17 squad were she travelled to Spain to play in FENA. Julie is captain of the Wallace senior squad and plays for the Lisburn based Larkfield Netball Club.

The girls faced gruelling selection processes including  Multi Stage Fitness Tests (MSFT) were they had to reach above a Level 10 on a Bleep Test, and of 70% match play, to ensure that their standards were of an International level. Selectors from all over the country came to assess the players and their progress since they started training last year and to whittle it down to the 12 top players.

Year 11 student Claudia commented, “It was hard trying to get to the gym as much as possible whilst trying to fit in school work and playing for my club at the same time, but it was all well worth it in the end! I’m really looking forward to FENA and I hope I can do myself, my club, and the school proud.”

Both girls’ hard work has definitely paid off all at Wallace are very proud of their achievements and look forward to hearing of their FENA experiences.