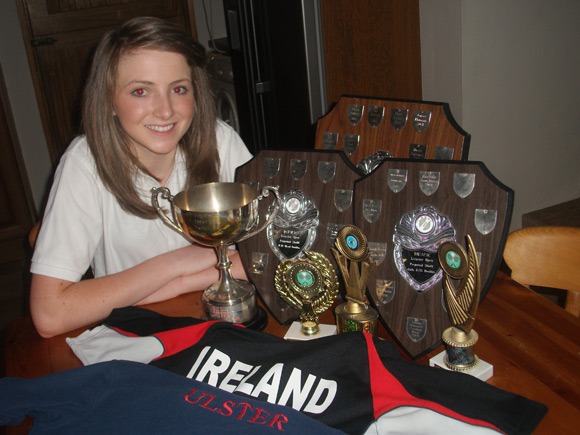 The 13 year old Wallace High School pupil and Alpha member made her Ireland under 17 debut at the European under 17 team championships in Slovenia, one of the youngest ever to play at this level. She has also represented the Irish under 15 squad and Ulster at both under 15 and 17 level.

Her successes have continued with a string of national titles; gold in the Ulster, Leinster and Ireland under 15 championships (where she also won the doubles titles), as well as gold in the prestigious Under 17 Badminton England Open Championships. Alannah has also been selected for the UK School Games to be held in September, where she will compete against many other older pupils from across the UK.

Whilst obviously busy with training and competing outside school she also found the time to represent her school at both hockey and tennis and led the badminton team to All Ireland success at Gormanstown in March this year, the other girls in the squad being Evie Dornan, Zara Kirkwood and Nicola McIlroy.
Badminton is obviously in her blood as older brother Tony enjoyed an illustrious underage career and is now training full time in Denmark, whilst sister Ashleigh represented Wallace in the Ulster Schools’ “Champion of Champions” where she won another family gold medal.

Alannah wishes to thank a number of people for her success: “I really appreciate the support shown to me by all at Alpha and especially Trevor Woods. My brother Tony has been a real inspiration with his attitude, determination and success, whilst mum and dad have supported me in so many ways. I can’t wait for next season and hope to build on my achievements from this year.”