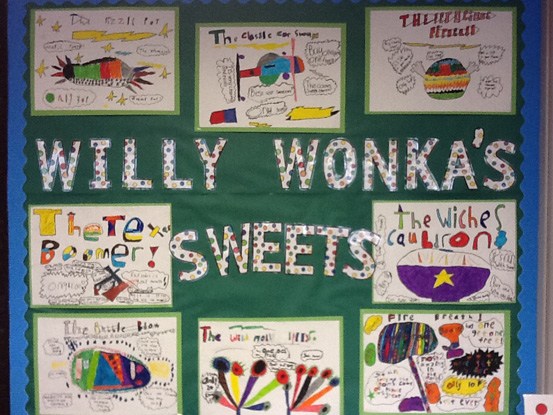 The children of Prep 4 have created their own ‘Willy Wonka’ style sweet!  Not only have the pupils designed their very own tasty treat, they have produced a poster advertisement in an attempt to sell as many sweets to children around the world as possible!

During Prep 4’s ‘Roald Dahl’ topic, the class read the famous authors story ‘Charlie and the Chocolate Factory’ which provided the class with the inspiration they needed to gather ideas for their own delicious sweet.

The poster advertisements are colourful and full of persuasive writing techniques to entice the public to buy their sweeties!  Lewis Carson created a particularly interesting sweet known as ‘The Ferocious Fireball’.  His poster which included interesting adjectives, alliteration and plenty of exaggeration won the ‘Willy Wonka Sweet Challenge’.  I have no doubt Mr Hanvey would have had an agonising decision in choosing a winner due to the number of high quality tasty treats produced by the other children in Prep 4. 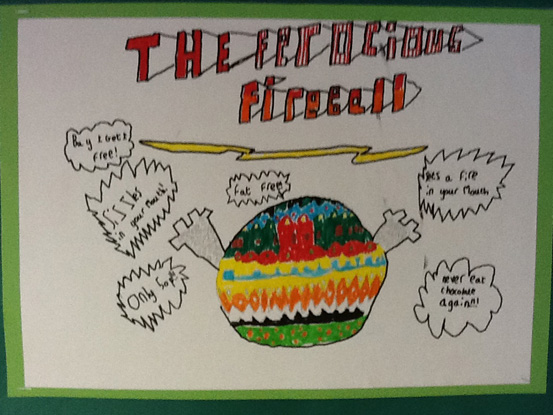 Prep 4 have thoroughly enjoyed their ‘Roald Dahl’ topic for the first half term.  They have produced WANTED posters of Mr and Mrs Twit, describing their appearance, personality and habits to help capture the horrible couple!  The pupils have also listened to descriptive language from the book ‘Matilda’ to produce portraits of the scariest headmistress of them all……Mrs Trunchbull!  The entire class have thoroughly enjoyed the topic.  Alice McMullan stated it was ‘very interesting and fun!’ with fellow classmate Jodi Morrison saying ‘The Roald Dahl topic has made writing more exciting’!

There is no doubt Willy Wonka has a new sweet manufacturer competitor in the form of the Wallace Prep 4’s! It would be of no surprise to see a new and improved chocolate treat or sweet surprise created by a Prep 4 pupil on the shelves of your local supermarket sometime soon!