Return of the “petrol head”

The future looked very bright in 2004 for former Wallace pupil Eddie Thompson when he left school for university equipped with an outstanding 4 A grades in Mathematics, Further Mathematics, Physics and Technology.

Eddie was the “A” level Mathematics “seating partner” of the newest member of the Mathematics department, Mrs J. Cousins; the friendship fostered over what a former Principal called “hard sums” led to an invitation to come and share with current Wallace pupils the benefit of studying Mathematics at A-level.

Friday 13th March saw Eddie visiting Wallace in sophistication and style when he pulled up in a white McLaren 12C Spider! Its well-tuned exhaust certainly announced its presence! 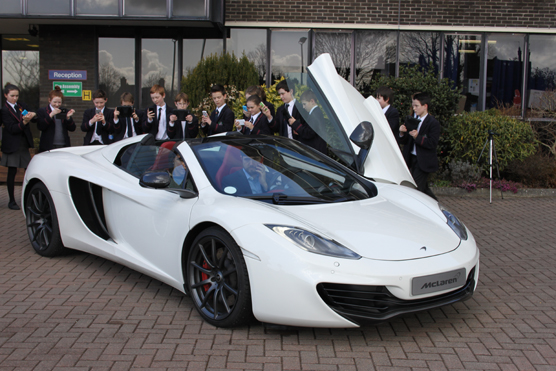 Always in his own words a ”petrol head”, Eddie completed and obtained a 1st in Mechanical and Manufacturing at Queen’s University, Belfast where he was also a member of the Formula Student Team which designed, built and raced a single seat race car.

Eddie decided to apply for a Graduate Engineer job in McLaren with the sole hope of receiving an official piece of McLaren headed notepaper rejecting his application. He thought it would be the ultimate keepsake!

Eddie never did get that rejection letter. Although unsuccessful in his application for the Graduate Engineer position he so impressed his interviewers, that he was invited to apply for the position of Project Engineer. His base? Only the McLaren supercar division! Eddie shared with his Wallace audience that McLaren employed two graduates that year and both were from Queen’s, a great tribute to the university. In Eddie’s own words “I was ecstatic!” 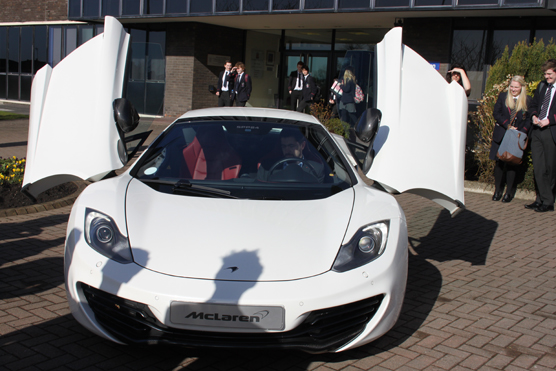 His job has seen him fly all over the world visiting Austria, Italy, Spain, France and Germany meeting suppliers and testing cars. Eddie’s main responsibilities are the Exhaust and Heat Shields for the McLaren MP4 12C. In designing exhausts not only does he face the usual engineering challenges of cost, weight, performance and durability but also the NVH (noise, vibration and harshness) of the vehicle because as we all know, the noise of a supercar is of paramount importance! Describing exhausts as “not particularly glamorous” Eddie astonished his audience by referring to his current project budget of £1.2 million! Work at McLaren technology is “intense, high pressure” but really a dream come true as “you end up being able to do all the things you always wanted to do.”

Five and a half years later Eddie has many stories to tell of rubbing shoulders with the rich and famous. He has crossed paths with owner Ron Dennis and their various worldwide clients and past and present McLaren F1 drivers including Lewis Hamilton, Fernando Alonso and Jensen Button. Speaking about the value of his “A” level choices Eddie observed “I couldn’t have done as well at university if I hadn’t had my Further Maths. I had covered all the topics in first year at QUB while at school. It was a brilliant grounding.” He noted that his Technology “A” level allowed him to simulate what he was learning in theory in Maths and Physics but suggested that his own “A “ level project was “really simple compared to what is being done in school now.” 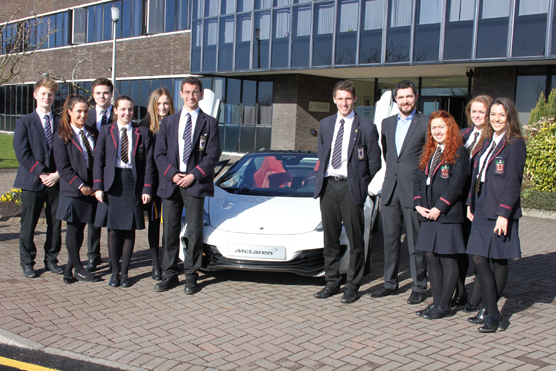 Asked about his driving habits, Eddie shared that he has a McLaren licence which “allows me to go lashing around the country in other peoples’ cars” but that his own car is a Mark V1 Golf GTi.

Like many former pupils Eddie could hardly work out where ten years had gone but he assured his enthralled audience that he’d relished his time at Wallace and was delighted to be back to visit. He does have a constant reminder of his days at Wallace as he is happily married to another former pupil!

Speaking of the event Mrs Cousins said “It was great to see Eddie and to hear of all the excitement of his job. Our pupils were enthused and Eddie certainly convinced them of the value of STEM subjects. As for the car….I don’t know that the excitement of sitting behind the wheel has subsided yet and I’m just talking about the teachers!”