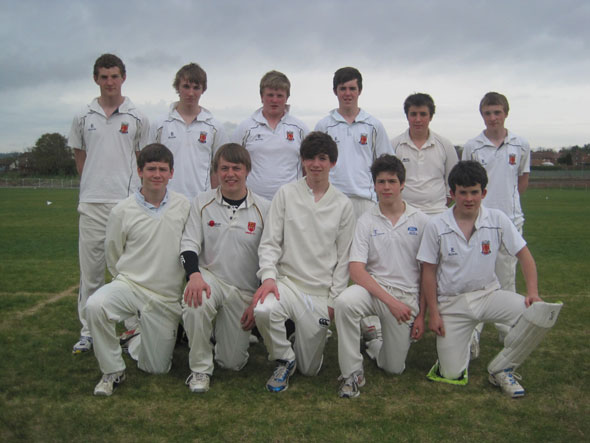 The 1stXI lost by 9wickets but showed a vast improvement in batting scoring 166 for 6 in 25 overs. Rory Stewart excelled with the bat hitting 4 fours and 2 sixes in a quick fire 51 and there were also useful contributions from Jordan McMullan (30), Matthew Godfrey (25) and Matthew Ballentyne (24). The Wallace bowling must now be addressed as only Richard Brownlee (1 for 31) took a wicket as Aicken(73no) and Burns (52no) saw Regent home with four overs to spare.

The U15XI won by 7 wickets at North Down Cricket Club with Robin Walsh (2 for 20) and Mark Hylands (1 for 12) being the pick of the bowlers as Regent were restricted to 106 for 4 in 20 overs. In reply, Jake Clements (35no) showed excellent timing and shot selection and he was ably supported by Mark Hylands (25) and James McCallan (25). Wallace got home with seven balls to spare.

The U14XI won by 10 runs. Wallace scored 135 for 4 in 20 overs. Michael Goodfellow added impetus to the innings with a quick fire 32 which included 5 fours and a six and he was assisted by Daniel Nelson (29no) who rotated the strike well and ran sensibly between the wickets. Chris Crawford (25) was the only other batsman of note. In reply, Regent fell short by 10 runs.

The U13XI produced another competent display winning by 35 runs. Skipper Neil Kilpatrick continued his good form with the bat scoring 36 while Ryan Getty again got runs with 24no. In reply, Regent got 63. Philip Hylands (2 for 4) and Ryan Getty (2 for 9) were the pick of the bowlers.
The U12XI showed much improvement from the previous week in all aspects of the game, beating Regent by 79 runs. Wallace batted first and got 103 for 2 with Nathan Cartmill scoring 48no and Michael Smyth 24no. The two batsmen put on 90 for the third wicket and timed the ball superbly. In reply, Regent got 24 with Ryan Garnham bowling accurately (3 for 2) and Ross Waite (2 for 1).

With each team involved in points scoring when they win, the final scores were The Wallace High School 20 Regent House 14.

This Saturday, Wallace play BRA in a friendly fixture. The 1stXI and U13XI are at the Castle Grounds while the U14XI are at Roughfort. The U15XI and U12XI are at home. All matches start at 9.00am.