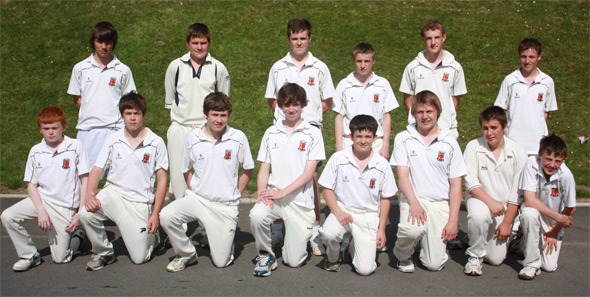 The Wallace High School U14 XI defeated Friends by 9 wickets in the Ulster Schools’ League to set up a quarter final clash against Grosvenor Grammar School.

Friends batted first and lost their first wicket in the fifth over when Mark Hylands clean bowled Allen for 8 with the score on 23. The introduction of Jake Clements curtailed the run rate further and when he clean bowled Ferguson for 1 Wallace were in the ascendency. Robinson batted well for Friends hitting some powerful boundaries before Ryan Moore had him caught by Beckett for 19.

Friends offered little resistance down the order and were all out for 68 in 20 overs. Pick of the Wallace bowlers was Jake Clements with 3 for 14 from 4 overs. Ryan Moore had 2 for 9 and Mark Hylands 2 for 11 from 4.

In reply Wallace eased to victory in 12 overs for the loss of Hylands for 9. James McCallen displayed some excellent timing and strokeplay as he finished on 49 not out. Wallace won by 9 wickets.