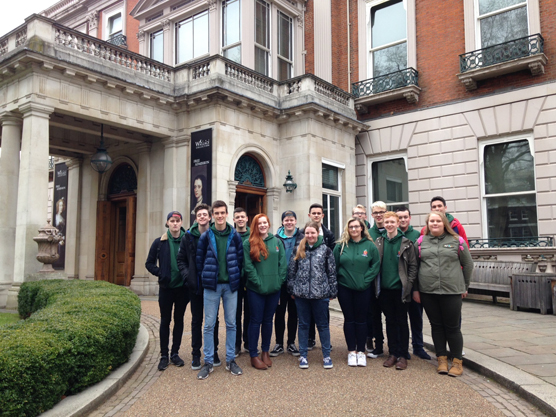 Upon arrival in London, we took the tube to our first stop at Speakers Corner. Speakers Corner is an institutional cornerstone of British democracy and it allows anyone the opportunity to speak, debate and discuss any of the major issues of the day. Having digested a range of conflicting political and ideological viewpoints, we made our way to No 10 Downing Street.
We then had the added bonus of being allowed to go down Downing Street to take hundreds of “selfies” outside the most famous address in London. Mr Armstrong then took the group on a walking tour of the area up to Trafalgar Square.
Following dinner, we visited the London Eye. After a dramatic 4D experience, we boarded our capsule for a scenic overview of the political and cultural sites of London by night. 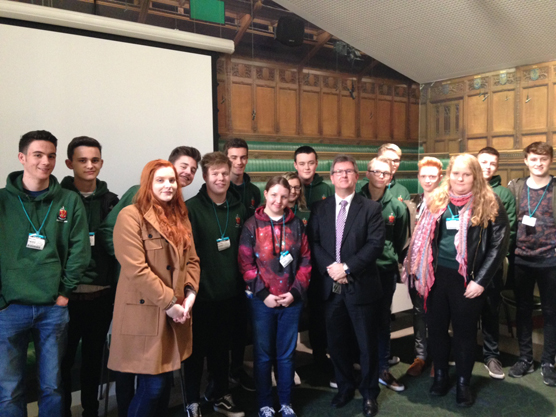 Following breakfast, we made our way to the Houses of Parliament. Having successfully negotiated security, we began our tour with the excellent Education Service, taking in the historical and political significance of the buildings. We were fortunate to be able to visit both the House of Commons and the House of Lords.
Following our tour, the Education Service led us through a workshop on the legislative process within Parliament. This provided students with an opportunity to revisit their examination material and engage in debates.
The MP for Lagan Valley, Jeffery Donaldson then met us. This session was invaluable for the students in trying to understand and articulate the important role played by MPs and Parliament in the democratic processes in the United Kingdom. Students challenged Mr Donaldson on a number of issues relevant to them whilst also learning about the practicalities of being an elected representative.
Following lunch our second stop of the day was the UK Supreme Court, located in Parliament Square. The Supreme Court is the highest court in the land and hears cases on a range of issues from divorce, murder, assisted suicide and property rights. The rulings of the twelve justices impact upon the whole of the legal system and it therefore plays an important part in British democracy by protecting the rights of citizens. Our tour guide then led an engaging and thought provoking question and answer session with the students. This was followed by an insightful question and answer session with Lord Justice Kerr, who is Northern Irelands only Justice on the Supreme Court.
After another walking tour up to Buckingham Palace there was some retail therapy on Regent Street and Oxford Street.

After breakfast and the packing of suitcases we began our last day in London. We made our way on the Tube to the Churchill War Rooms. The War Rooms were used by Churchill and his Cabinet during World War Two whenever the ‘Blitz’ of London began. It provided them with the necessary shelter to run the country and the military campaign against Nazi Germany. It is an amazing piece of historical preservation as the War Rooms show exactly the conditions that those coordinating Britain’s war effort worked in.
Our last stop of the trip saw us visit The Wallace Collection. The Wallace Collection is named after the founder of our school and it houses an art and medieval weapons display to rival that of the National Gallery and the Louvre. Our tour guide expertly led us around the myriad rooms and corridors whilst extolling the virtues of the Wallace family and its close link to Lisburn.
After collecting our bags and catching the Gatwick Express, we boarded our return flight home for some much needed rest and relaxation after our fun packed, educational and truly memorable Politics trip to London.