Wallace High School Upper Sixth pupils provided a festive end of term treat for the entire school community by serving up two tasty helpings of their “Christmas Pie”. Christmas Pie is a long standing Wallace tradition, with the end of term show being enjoyed in the Clonevin Park School for over thirty years. 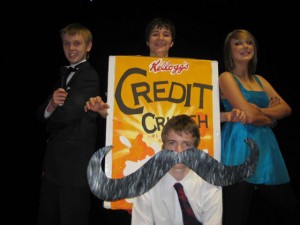 Upper Sixth pupil Chris Williams explained, “Pie is a real highlight of the school year here in Wallace and all of Upper Sixth have thoroughly enjoyed scripting and rehearsing this year’s show. This year we took the very topical issue of the credit crunch and wrote an hour long show based on the theme. ”

Phoebe Preston went on, “The breadth of talent displayed by our from was amazing. The choreography of Jason Irwin, Tonee Cummins and Emily Sloan meant that the dances to this year’s big hits “Disturbia” and “Womaniser” were incredible and the band were amazing too. We had such fun during rehearsals and it was great fun working creatively together. ” 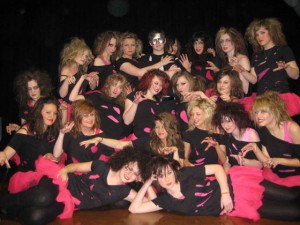 Head Boy Richard Johnston added, “Thanks must go to several teachers including Dr Fulton, Mrs McIvor and Mrs Flavelle. A special mention must go to Mrs Dumigan and Miss McGarry whose patience and support every step of the way made our experience amazing. Pie simply wouldn’t have taken place without them.”

Directors Julie Dumigan and Gillian McGarry concluded, “It was a pleasure to work with such a bunch of talented young people. Christmas Pie raised £1700 for Childline/NSPCC and thanks must go to the generosity displayed by the entire school community in raising such a fantastic sum, as well as the Upper Sixth pupils for their hours of extra curricular commitment over recent weeks.”