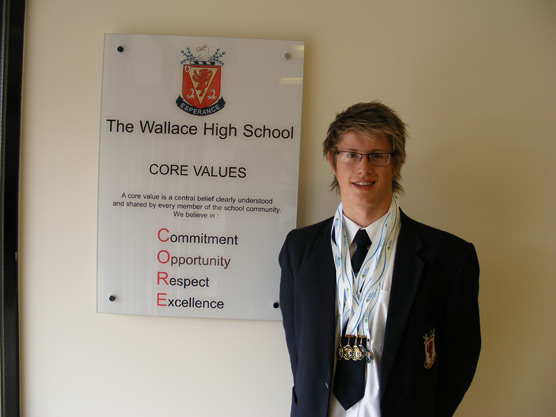 Adam Matthews, a Year 13 student at The Wallace High School enjoyed a successful summer season in the pool, culminating in seven medals at the Irish Long Course Youth and Senior Championships held at the National Aquatics Centre in Dublin.

Despite a tough second half of last season trying to recover some kind of consistent form after illness, Adam ended the season on a high. Finally finding some great form, he managed to secure two individual silver and two individual bronze medals as well as three relay gold medals. This was all the more impressive as he only graduated as the youngest swimmer into the extremely competitive 17-18 men’s age grouping six days prior to the competition.

His best swim came in his primary individual event, the 200 metre freestyle, where he clocked a new personal best of 1:56.84 to secure the silver medal despite his entry ranking of 22nd. As well as re-securing his place in the Ulster senior squad, his time was also an Irish Regional High Performance squad qualification time for the upcoming season.

After a short break in August Adam is now back into full training in preparation for the Inter-provincial meet and Irish Short Course Championships in October.

Commenting on his successes Adam said: “Last year was a tough year because of illness and I missed a lot of valuable training time and competitions. I was really delighted with my summer performances and to win seven medals and achieve a personal best in the 200 metre freestyle was brilliant. I’m now looking forward to what will hopefully be another successful year.”