A brief but moving ceremony was held in the Mournes on Saturday 6th September to celebrate the contribution of the late Bill Wilson to the Duke of Edinburgh’s Award Scheme in Wallace High School. The initiative was spearheaded by Mr Colin Henderson, a close friend of Bill’s and a member of the Mourne Expedition Panel. During the period of Bill’s illness Colin undertook an arduous sponsored event in the Wicklow mountains raising over £2,000 for research into pancreatic cancer, the cruel disease which took Bill’s life. The Wallace community has been passionate in raising money for this cause and awareness of the disease. In the six weeks following Bill’s death in November last year over £11,000 was donated via the school’s Just Giving page and ,of course, subsequent Gift Aid increased the total.

Colin also assisted Wallace Vice-Principal David Cleland in organising the Bill Wilson Memorial Walk in May of this year. Current and former staff members met with current and former pupils to complete a route in the foothills of the Mournes. Over £3,000 was raised by the event which was marshalled by volunteers from the Mourne Expedition Panel and enjoyed by all. 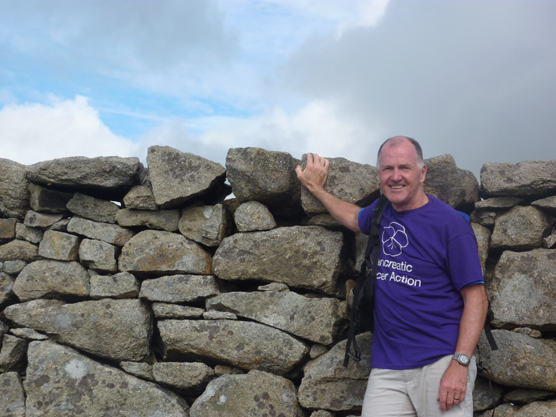 Saturday’s ceremony was part of a long day for Colin as he was completing the Mourne Wall Walk. He was accompanied on this twenty two mile climb by Alastair Chisholm and Trevor Quinn who are also assessors for the Duke of Edinburgh’s Award. The intrepid trio met up with other assessors, former Wallace Senior Teacher Lois Stewart and current Senior Teacher Heather Gracey, to place a memorial plaque in Bill’s honour. The group watched a short extract (conveniently downloaded on an ipad) from Bill’s speech at his daughter’s wedding when he told the notorious “broccoli” joke, a joke which was synonymous with Bill. A bottle of red wine christened the plaque before the three walkers moved on to higher places! 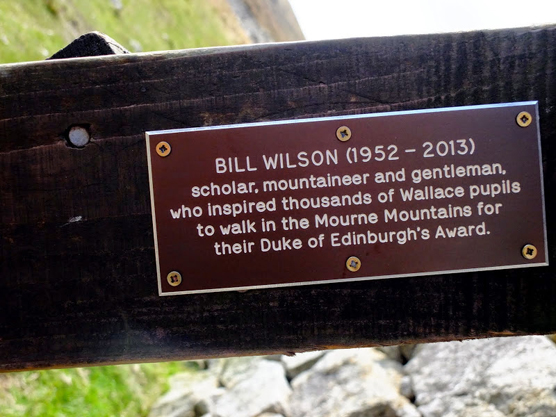 Colin, Alastair and Trevor completed their long day’s walking around 8.00 pm and to date Colin has raised around £1,500 in donations for Pancreatic Cancer Action. His Just Giving Page can still be accessed and is entitled Mourne Wall Challenge Walk.

To Wallace pupils Bill was “Mr Duke of Edinburgh” and the plaque’s wording is a brief but moving testimony to his inspirational contribution to the scheme. Doubtless, many former pupils will , in the months and years to come , take time for a moment’s reflection as they climb the stile and remember our “scholar, mountaineer and gentleman”.